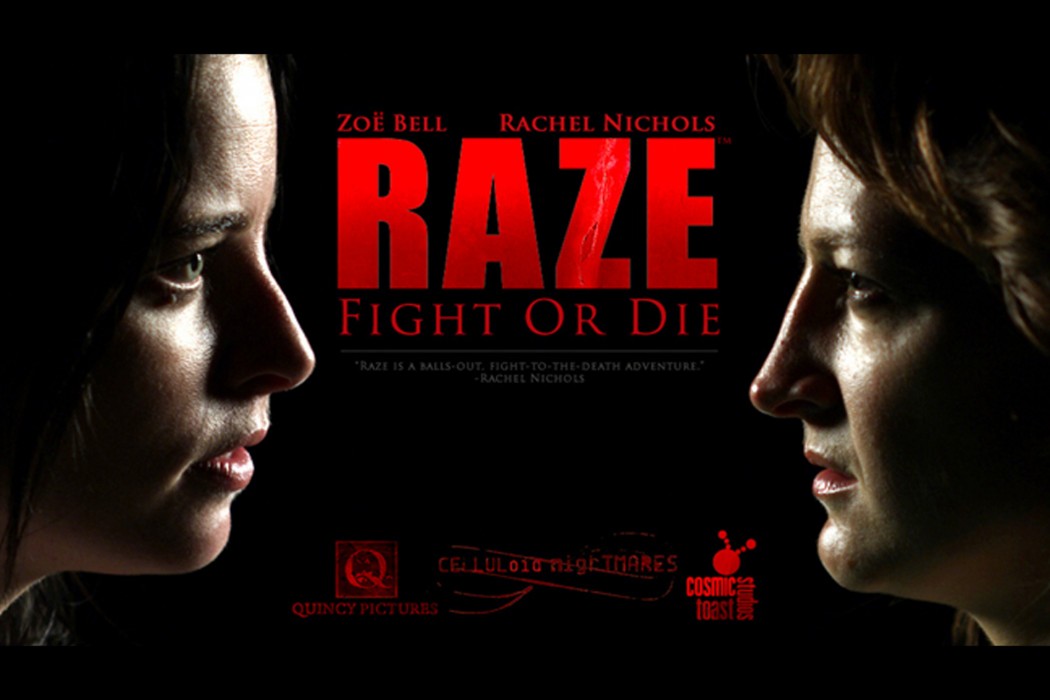 It’s a long way from suburban Auckland to Hollywood, but when V&F spoke to Zoë Bell on the set of her new film Raze, there’s nowhere else the stuntwoman, star and producer seems more at home.

The group of identically dressed young women in white tank tops and grey tracksuit pants are looking scared and angry. They’re surrounded by a series of tall, mean-looking guards dressed in military garb. It’s not clear who’s going to come off worse, but someone’s bound to get hurt. An hour ago, I was in a very different place, a carpark, in fact and a pretty standard looking one, completely devoid of mean, scary-looking people. I pull my car in not far from Bob Hope airport in suburban Burbank, in the San Fernando Valley of Los Angeles. I’d been told to look for Lindsey Arnold (marketing producer) around the back entrance of the sound stage, but every warehouse, transport company parking lot and industrial facility looked the same. After a few phone calls I eventually found her, and she greeted me like an old friend and took me to the nondescript back door of one of the many large, nondescript buildings. We squeezed down a small corridor and into the open area ahead of us; a snaking maze of cables, tall chairs, tables and people wearing headsets and rushing around.

Suddenly the activity stops dead. Everybody freezes and seated not far away, director Josh C Waller calls Action. The scene unfolds on a monitor nearby because the actors and camera are locked away inside the set, out of view. It’s gripping stuff, but it ain’t pretty.

Welcome to Raze, the first and most creatively accomplished women-in-prison movie you’ve seen in years. 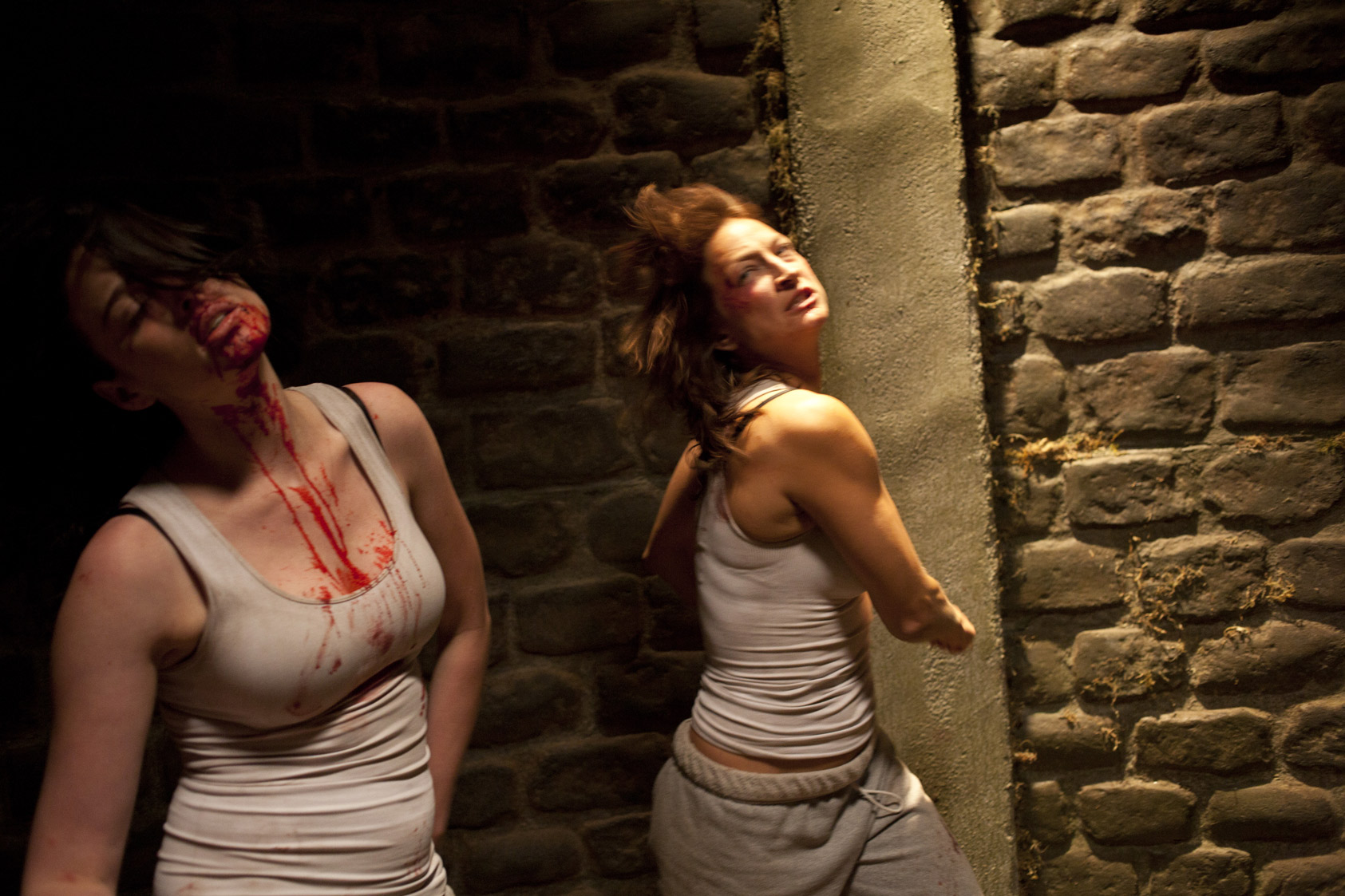 Zoë Bell in Josh C. Waller’s “Raze,” which depicts an underground lair in which abducted women have no choice but to fight each other to the death (copyright Cinipix)

Before long Lindsey brings over the star of the show, New Zealand-born Zoë Bell. All verve and energy, Bell’s grin is a mile wide as she bounds over. Despite being dressed in the same blood-spotted tank top and shin-length pants, she’s clearly in a good mood.

After making her name on the New Zealand-set Xena: Warrior Princess, Bell rode the wave of popularity for all things Kiwi (or maybe she helped propel it), becoming Quentin Tarantino’s go-to stunt girl in films like Kill Bill and Death Proof (in which she also had a screen role).

Since then her star has risen in Hollywood as a fight choreographer, stunt performer and stunt coordinator, but Bell’s being spending more time in front of the camera as well. She’s had roles in movies as diverse as Hansel & Gretel: Witch Hunters, Oblivion and Tarantino’s Django Unchained, as a slave-era tracker. Raze marks her first starring role as an actress, playing Sabrina – a woman thrown in a cell and told to fight for her life.

“It’s weird,” Bell says about the differences (and similarities) between stunts and acting, “There are multiple sides to both acting and stunts but a lot of fibres follow through that have made it easier for me to access stuff as an actor. The flip side is that my identity as a stuntwoman is almost the opposite to my identity as an actor.

“My identity as a stuntwoman is sort of blokey; one of the lads. You never see me cry, you never see me lose my temper, you never see me vulnerable or feminine. But as an actor – especially an actress – I have to access my sexuality and vulnerability and really emote in front of people. I’m now an artist as opposed to an athlete. It’s a drastic shift.”

Now Bell faces another dramatic shift as she puts on another hat – that of producer. Raze started life as a 15-minute short film written by Kenny Gage, who also wrote the feature script. Discussions with Waller convinced the pair they had the premise for a full-length feature, and the pivotal moment came when Gage said they needed “someone like Zoë Bell”. Waller, who’d known Bell for years, suggested they call her right then. “He was name-dropping a name that wasn’t even worth dropping,” she laughs. 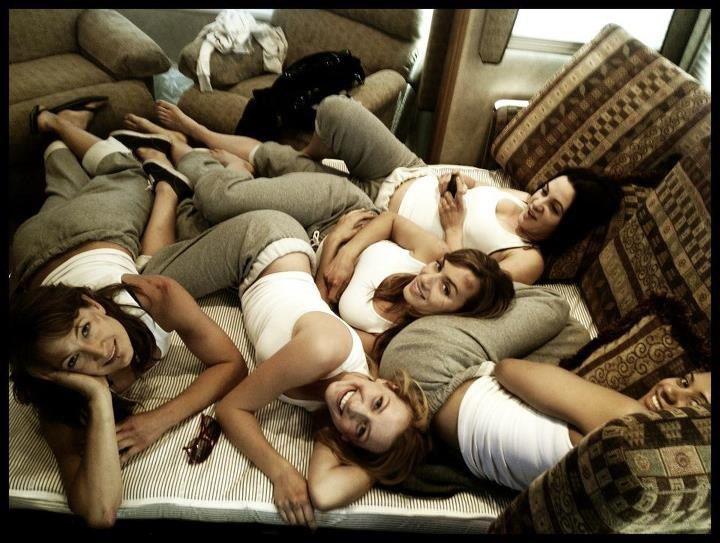 The women of Raze (copyright Cinipix)

Waller and Gage originally approached Bell to coordinate the stunts and fight scenes of the short film, but after a few appearances in front of the camera the actress says she wasn’t sure what direction she wanted her career to go, just that she was pretty sure she wanted to let coordinating go to some extent. But she agreed to talk about it.

“I walked into this little studio and just loved the energy, loved the idea of it, loved the concept,” she says, “and it’s sort of scary when you have to start accepting that your name means something, especially in female action. They really wanted me to be involved and asked if I could be a producer, and I was in. I love the collaborative process. I love the idea of being part of it from the beginning and giving my opinions and throwing ideas and seeing if it sticks.”

While shooting the short, Bell fell in love with her character of Sabrina and got right into fleshing out her backstory, prompting the team to wonder whether Raze might make a successful web series or even a full-length movie.

“We were just green enough so we didn’t tell ourselves it was a bad idea,” she laughs, “We were just running to keep up with our heads, trying to keep our feet underneath us the whole time.” 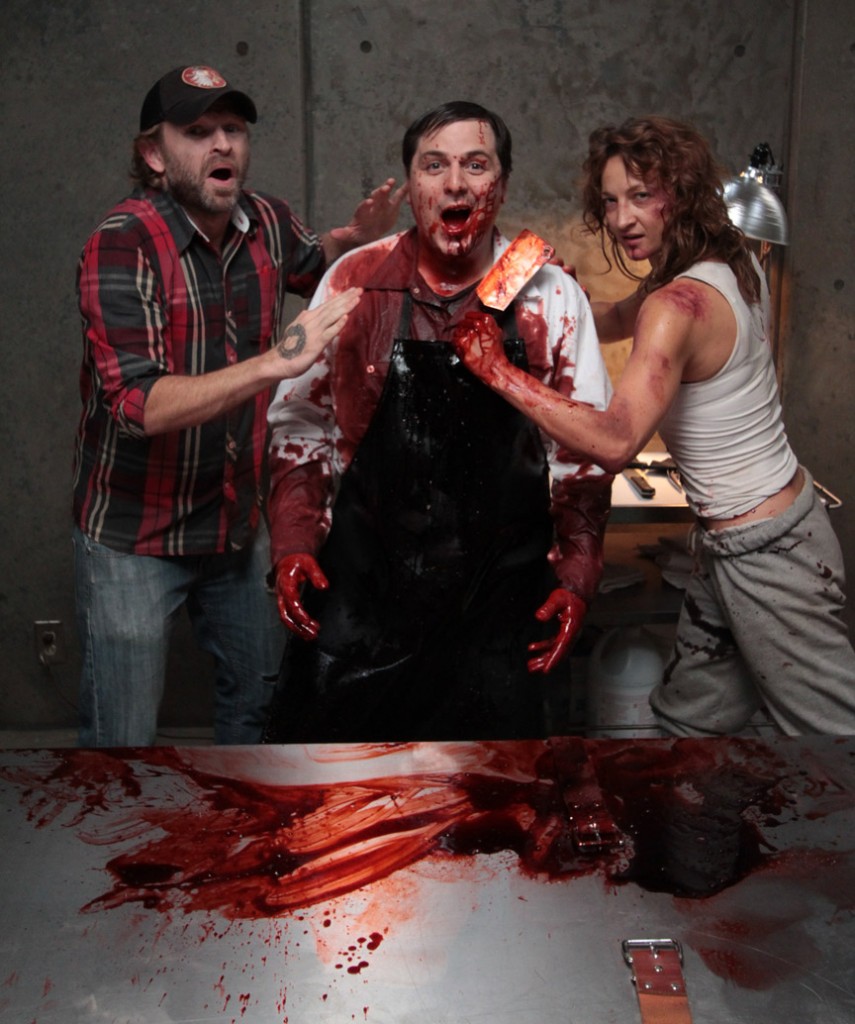 THERE WILL BE BLOOD

Which is how we ended up here. The indoor soccer field-sized set contains a series of purpose built walls made to look like the rough stone of the prison complex, all of which can be shifted and reoriented to represent different rooms and areas of the complex. It’s movie magic in the flesh – a few makeshift panels of plaster, wood and paint big enough to fit into an area the size of a large living room will go through various alignments and iterations to play individual areas of a heavily fortified stronghold, including the round fighting chamber of dirt floor and brick walls.

The small army of organised chaos that makes up a film set occupies the rest of the space. A craft service table covered with drinks and snacks sits not far away from video village (the name given to the director’s work area of monitors and relays that provide video and audio feeds of the action).

Benches hold equipment and props. A trolley is wheeled across the floor after a take containing the RED camera used in shooting – because of the dusty environment on set, special airbrushes have to be used to clean the camera’s body and lenses.

The scene we’ve just watched is as ominous as it is effective. Herded by the scary guards, about six of the captive women are led down a corridor. They pass an open room where a man in a bloodstained apron slowly sharpens a surgical saw. He looks up at his passing quarry disinterestedly, his manner making him seem sure he’ll be seeing them sooner or later. It’s more than a little disconcerting when he comes over later with hand outstretched, smiling and introducing himself as Andrew Pagana, one of Bell’s co-producers.

The set design is quite ingenious even if Bell says there was a downside (“once we’d deconstructed the cells and turned it into a hallway and the office, we couldn’t go back,” she explains), but it was necessary to keep the budget down.

Which is probably a good time to mention that because Raze is a low budget independent film, it’s in good company in the rest of the women-in-prison genre. 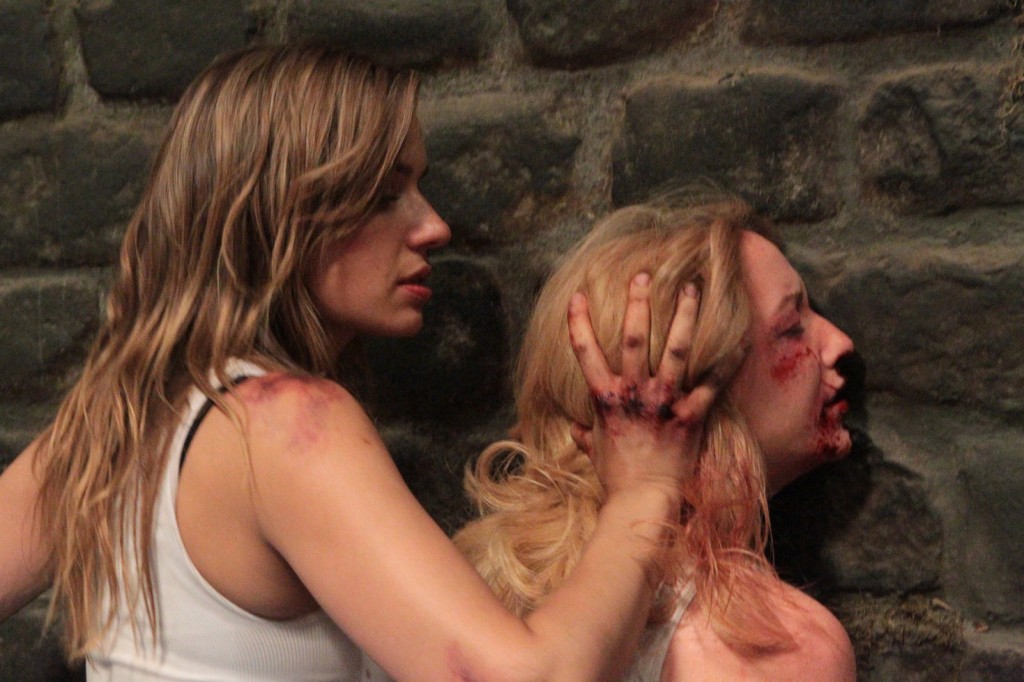 Growing out of the exploitation/grindhouse aesthetic of the 1960s and ’70s, there was a (somewhat disturbing) trend of movies about women locked up, abused and forced to abuse each other. Popular hallmarks were beatings, sexual torture, titillating lesbianism, forced prostitution and fights. Depending on your outlook, the movement can be a cheesy good time or a best-forgotten blight of lurid, morally (and often creatively) bankrupt misogyny.

But screenwriter Gage and director Waller have eschewed the more salubrious aspects of the subgenre. Particularly thanks to Bell’s involvement, <Raze> is all about one thing; blistering, bone-crunching fights. As Sabrina, she leads a troupe of actors giving surprisingly affecting performances, and Raze is more about the horror of what they face than it is about salacious thrills for the audience.

Bell explains how the creative brains trust decided not to make it a sleazy farce but adhere to the conventions even while breaking free of them. “The initial idea was far more like pinup girls, far more like women in prison,” she says, “but Kenny’s whole thing was that the fights had to be awesome, he was sick of seeing female action with lame fights.”

“Josh is by nature more of a drama man, he and I were on the same page about how important the journey of the women was, and he wanted to make it as different as possible from an exploitation or grindhouse movie. For me, I was aware of wanting the fights to be as ‘uncampy’ as possible, and that played into Josh looking for the performances that would avoid camp.” 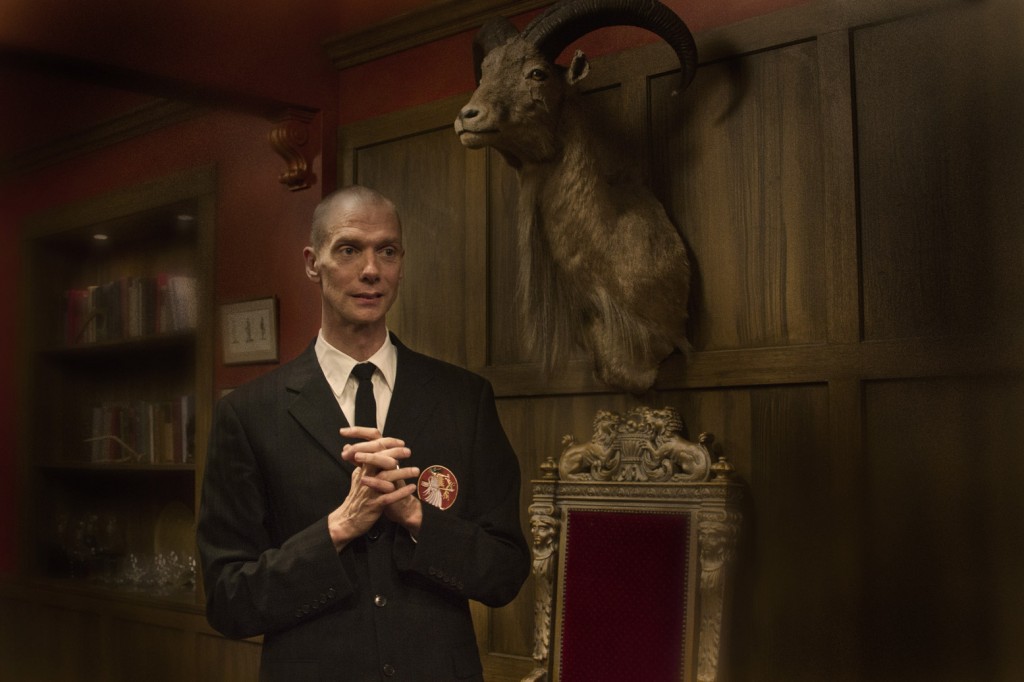 When you watch Raze, you can see Bell evolving before your eyes, from a stunt performer to a fully-fledged film creative. She says she’s quite consciously positioned herself slightly away from stunt work. “It was necessary for me to make a full transition,” she says, “otherwise I’d keep holding on to what’s comfortable… like jumping off buildings, ironically.”

More importantly, it’s causing a shift in how the industry and audiences perceives her. “It’s so advantageous to be considered Quentin Tarantino’s stunt girl. But when you’re trying to be an actor it’s a really strong title to try and break out of. It sticks.”

Part of the new Zoë Bell is also that of businesswoman, one she’s already met success with because Raze’s budget was so low the film is already in the black. Distributors IFC films have opted for a release plan that’s becoming more common, with a short theatrical window followed by wide availability through video on demand (VOD) platforms.

Though it’s not very widespread in Australia yet, the VOD market in the US is very mature, and releasing low budget films (whatever the genre) through iTunes, Netflix, Hulu, etc is an established business model with a new crop of mid-tier studios and distributors doing very well.

But there was an interesting quandary facing Bell the actor versus Bell the producer – a big, splashy (and expensive) theatrical season versus a lower-key but potentially much more lucrative digital release.

“As the producer and actor it’s about whatever gets the most eyes on it,” she says. “As an actor, I feel like this is some of my most solid work, so people seeing this might feel far more comfortable spending money on me in big budget movies.”

“But Raze is also the type of movie that if anything is going to get a diehard following. It’s not like I’m doing my best work in a summer blockbuster or a romantic comedy that everyone’s going to see at some point. It’s a very specific audience.”

Romantic comedy it surely is not, but the creative process and team behind Raze show a lot of love for their work. And if my recommendation for the work ethic and performance skills of Zoe Bell’s isn’t enough, perhaps Mr Taratino’s is.

All images by kind permission Cinipix