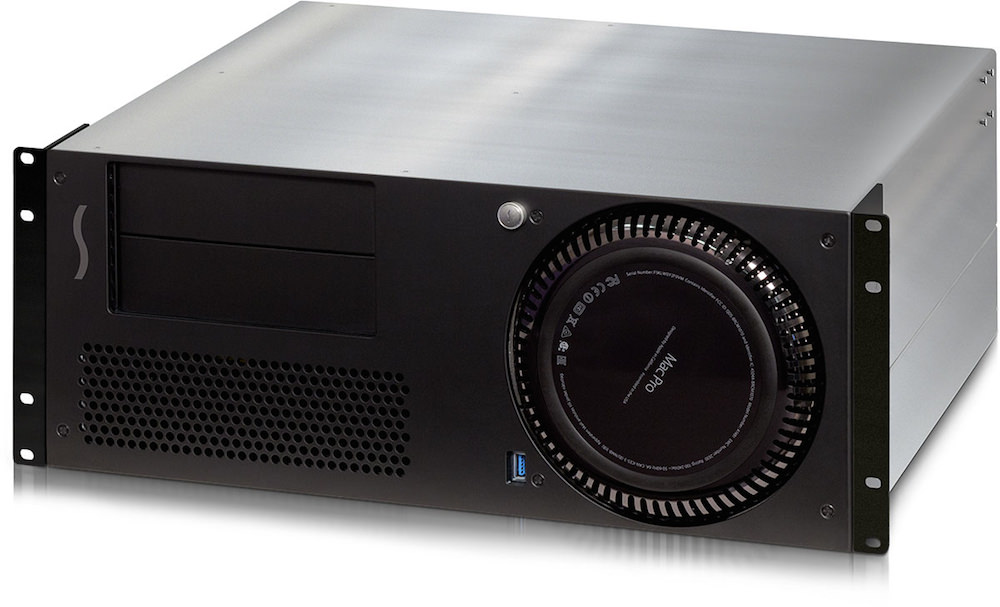 If you don’t do your editing or VFX on a Mac, then keep scrolling Buddy. Today we have some great news for those Mac-Heads looking for a little more POWAH! Sonnet has finally begun shipping its new xMac Pro Server which has a Thunderbolt 2-to-PCI Express (PCIe) expansion system and 4U rackmount enclosure .

Ever since xMac’s unveiling at NAB this year, we’ve been patiently waiting for this beauty to become available.

Basically it encloses your circular Mac Pro so it can fit horizontally in a rack, while also providing protection for the Mac when using it on a cart (used on film sets). How it does this is by placing the Mac inside a specially designed 4U modular enclosure, with three PCIe 2.0 slots that connect via Thunderbolt 2 (20 GB/sec), it also provides space to install additional equipment in two 5.25-inch mobile rack bays.

“The xMac Pro Server builds on the success of our rack-mountable xMac mini Server and Echo Express III-R Thunderbolt 2-to-PCIe expansion products to provide much-needed expansion capabilities for the latest Mac Pro, which on its own lacks storage expansion and PCIe slots,” said Greg LaPorte, vice president of sales and marketing, Sonnet Technologies.

“By supporting every Thunderbolt-compatible PCIe card available, the xMac Pro Server enables audio-video professionals to fully leverage their investment in the new Mac Pro and still use the high-performance PCIe cards they need.”

rear of the xMac, with a Mac Pro inside (image: Impress Corp.)

The PCIe card expansion module use of Thunderbolt 2 means it can support many of the highest-performing PCIe cards, including pro audio, Ethernet, and Fibre Channel, as well as SAS/SATA RAID controllers and video capture and editing cards. In addition, the expansion system supports up to three full-length PCIe cards with one x16 and two x8 PCIe slots.

Along with an integrated 300-watt power supply, the system includes one auxiliary 75-watt PCIe power connector for cards that require supplementary power, such as the Avid Pro Tools | HDX or the RED ROCKET-X cards. Two remarkably quiet (according to Sonnet’s marketing), temperature-controlled, variable-speed fans manage the airflow path (according to the Apple operating guidelines for the Mac Pro), to ensure cool, reliable operation in noise-sensitive environments.

The xMac’s mounting enclosure secures the Mac Pro in a protective steel cocoon covered inside with soft-touch padding, holding the Mac Pro firmly in place while protecting its mirror finish. The module also extends the Mac Pro’s Gigabit Ethernet, USB 3.0, and HDMI interfaces to panel-mounted connectors on the back of the unit for easy external cable connection, while a USB 3.0 interface and power switch are mounted on the front to enable users to connect a USB peripheral and activate the computer’s power switch.

As mentioned previously, the xMac provides space for additional expansion equipment. Sonnet’s tell us that when using the optional Mobile Rack Device Mounting Kit (Basic Edition), users can install two 5.25-inch mobile rack devices of their choice in the outer enclosure and connect them easily to cards installed in the PCIe slots.

Without taking up additional rack space, the kit supports a wide array of devices such as an internal LTO tape drive, four or eight swappable 2.5-inch SSDs, a Blu-ray burner, a Sonnet Qio MR pro universal media reader, or three swappable 3.5-inch hard disk drives. Sonnet also offers preconfigured Mobile Rack Device Mounting Kits that include the basic kit; one or two devices such as those mentioned above; a high-performance PCIe controller card to support the devices; and the necessary cables to connect them together. Users need only add their own hard drives, SSDs, or LTO tape drives to complete the package.

The xMac Pro Server (part number XMAC-PS) is now shipping at a suggested retail price of US$1,499. The basic-edition Mobile Rack Device Mounting Kit (formerly named Echo Express III-R Mobile Rack Kit, part number EXP3FR-MRM) has a suggested retail price of $199 and is available now; preconfigured Mobile Rack Device Mounting Kits are also available now at retail prices ranging from $699 to $1,899. Sonnet have an extensive list of PCIe cards already compatible with the xMac  (you can find the list onon Sonnet’s website, linked below) and they tell us the list continually growing as they test and certify more cards.

GEN X – THE ONE PLATE TO RULE THEM ALL

Genus Tech have created what it describes as a “revolutionary” new camera plate system, the Gen X, designed to work with multiple camera sizes,…