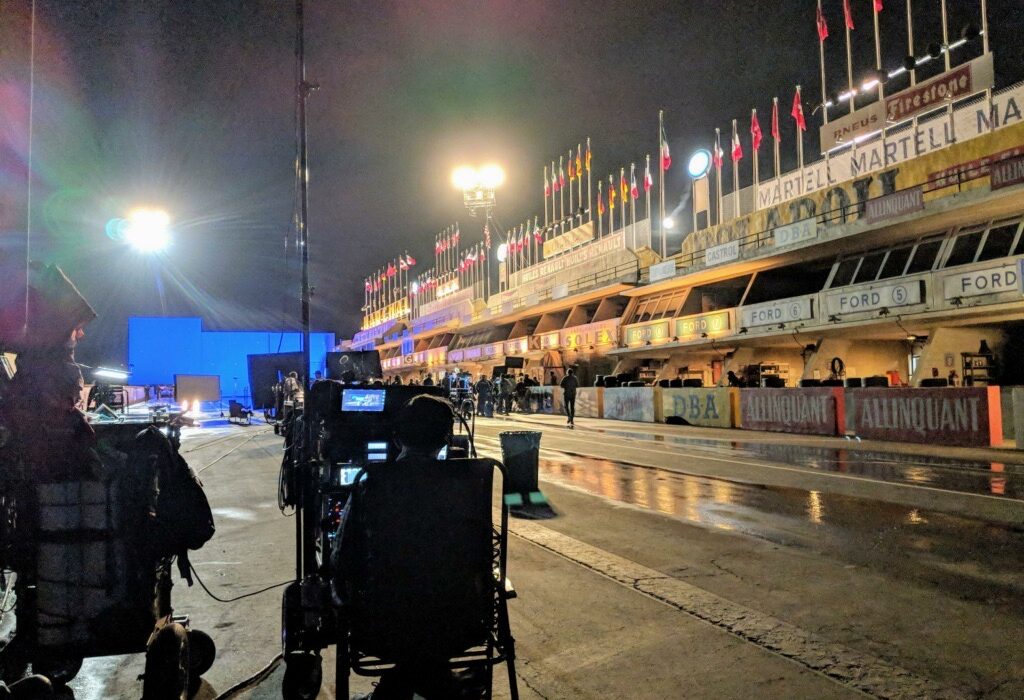 “The Lectrosonics gear never fails; it sounds as good as if you’re running cables, and it holds onto frequencies for dear life.”

Telling the true story of the Ford Motor Company’s upset racing victory at Le Mans in 1966, Ford v Ferrari (titled Le Mans ’66 in some European countries,) has earned praise for what many car aficionados say are the most realistic race scenes ever created for a feature film. This involved capturing the dialogue of co-star Christian Bale (as driver Ken Miles) at realistic speeds, a challenge which fell to production sound mixer Steve Morrow, a 25-year Lectrosonics user nominated for Academy Awards for his work on La La Land and the 2019 remake of A Star Is Born. Morrow kindly took some time with Lectrosonics to explain how he used ultra-compact SSM transmitters and rugged UCR411a receivers to put the audience behind the wheel of Bale’s fire-breathing Ford GT40 — as well as to explain the rest of his rig including the Venue2 modular receiver system, HMa plug-on transmitters, and more.

“I always use SSMs for all the actors’ mics,” says Morrow. “They’re the smallest and lightest transmitters Lectrosonics makes, they’re ultra-reliable, and the talent barely knows they’re there. Lectro has other transmitters with higher output power, but we’ve never had a problem with range. For most of the dialogue, we have active shark-fin antennas on long coax cables, powered from the Venue 2 receiver chassis.”

Recording cockpit dialogue, however, called for a different approach, as the cars would be driven around actual racetracks. “The cars, including the Shelby Cobra and Ford GT40, were put on a vehicle called the ‘Biscuit rig,’ so named because it was used in the movie Seabiscuit,’ explains Morrow. “It has its own motor and stunt driver, a movable pod for a camera operator, and hauls the vehicle around the track at speed. Christian was focused on acting, not driving, and we miked him up with an SSM and DPA 4062 mic, then put a simple bag rig consisting of UCR411a receivers and a field recorder right in the trunk of the car. The Biscuit rig is designed for shooting and there’s no room on it for a sound operator, so we had to just start the recorder, watch them drive off, and trust we were going to get a good recording. Lectrosonics lets me have that trust, and I like the UCR411a for this sort of guerilla work because it can really take a beating.”

The method worked so well, in fact, that they were able to record an exchange in which Bale talks to another driver who briefly pulls up alongside him: “For that scene, we didn’t have a separate audio bag in the other car, just a second UCR411a feeding another track of the recorder in Christian’s car. When the other driver pulled up, his SSM came within range, he said his lines, then drove away. It went off without a hitch!”

Lectrosonics recorded the sounds of the cars as well as their drivers. “We only had one vintage Ford GT40 on set,” recalls Morrow. “The rest were film cars with more modern engines for the sake of reliability. So, for authenticity, the post-production team went to a track day and convinced a bunch of guys with actual GT40s to let them record their engine sounds. Where boom mics were needed, we put HMa plug-on transmitters on the boom poles so that the operators could move around freely.”

For on-set communications and IFB monitoring, “my team, which included Craig Dollinger and Brian Mendoza, used LT transmitters to talk to each other, because of the convenient red toggle switch on the top that can be used as a mute. We also used an older UM400a as an IFB transmitter, and we all listened using IFB-R1a receivers. I’ve recently just gotten into the M2 Duet system as well, and am looking forward to using it more.”

Morrow credits Lectrosonics’ reliability and performance for his long-term loyalty. “The Lectrosonics gear never fails, it sounds as good as if you’re running cables, and it holds onto frequencies for dear life. I now have three Venue 2 units on my main cart, so I can do 18 channels of wideband. The SSMs are wideband-capable, which is key with the available frequency spectrum being such a moving target.

“Let me give you one last example of how solid it is,” he continues. “In 2017 I did a film called The Front Runner, which starred Hugh Jackman as the presidential candidate Gary Hart. We had 21 actors miked with SSMs at all times, and a lot of it is rapid-fire dialogue with people talking over each other, like a Robert Altman movie on steroids. Scanning for frequencies at the beginning of each shooting day took no more than 20 minutes — for everybody — and we had zero problems with crosstalk, dropouts, or interference. Even if you’re starting out in sound and on a budget, I strongly recommend that you get however many channels of Lectrosonics you can afford. This is gear you won’t want to replace in two, five, or ten years.”

Coming hot on the heels of the recent Adobe hacking is news that on Wednesday night crowd-funding platform Kickstarter.com had a security breach putting…