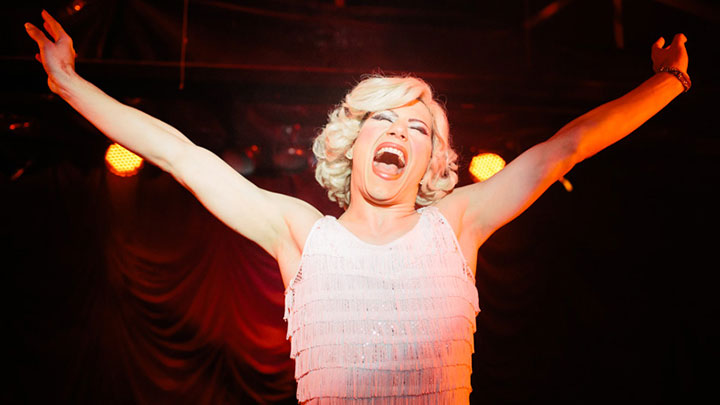 Two independent short films, Show Boy and Grey Bull, both shot by Callan Green ACS on Sony’s F65 4K CineAlta™ camera have been selected to premiere at this year’s Sydney Film Festival (4-15 June) and are on the list of finalists for the festival’s 2014 Dendy Award for Australian Short Films. Grey Bull has also been selected for the Melbourne Film Festival later this year.

Commenting on the short films Green said, “Working on drama is always a massive highlight for me as the majority of my work is generally commercial and music video based. Fortunately for me and everyone else involved, both Show Boy and Grey Bull were superbly well written. Even very early on in their draft cycles the strength of their stories shone though. Both directors wrote their own scripts, which in turn created a real sense of intimacy toward the characters and story – especially when discussing a visual approach.”

“With a bit of luck from the scheduling fairies, I was able to shoot the two films pretty much back to back, so the experience for me was very much an intense one but most definitely well worth it. Show Boy was a simpler film to achieve compared to Grey Bull, as it was an urban style shoot with predominantly naturally found locations. Grey Bull also had similarly found locations however it was a much harder film to make with all the petrifying aspects of an impending filmmaking disaster lurking around the corner. Grey Bull was an away job and almost entirely self funded by the director who had just completed a 3-year stint at VCA (Victorian College of the Arts) – So not much cash to throw around if you get my drift. On top of that we were presented hurdles such as “non-English speaking non-actor child actors” as well as working with animals, and big ones too. I was initially super scared of the bulls but it was a seriously pissed off cow that almost killed me!” 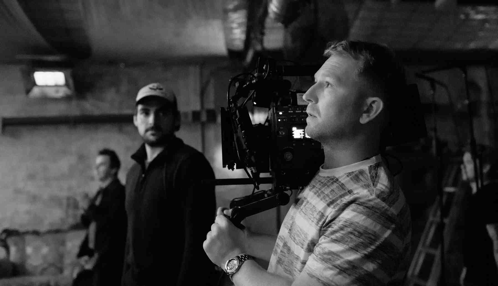 Meanwhile with $3K of funding from Metro Screen and just enough private financing via pozible.com to feed the crew of 12 people for a three day shoot – Show Boy began to take shape. It is a real-life story of Julian, a closeted teenager battling to support his drunkard father by performing drag shows at an inner city cabaret bar whilst under the guise of attending late night footy training.

Green continued, “I shot Show Boy with my Sony F65 because it gave me the greatest flexibility and highest quality images. Julian, the main character, is pretty messed up at home but tries to appear tough when outside so we amplified his emotions visually by shooting all his exterior scenes on Steadicam and all the interior scenes handheld. We mostly shot with natural light except for the cabaret scenes where I really wanted to experiment with colour – mainly the colour red.”

Green was one of the first in Australia to adopt Sony’s flagship F65 camera and has been using it successfully since its launch in late 2011, often describing it as a real cinematographer’s camera.

He continued, “Shooting with the F65 is an impressive experience; its ergonomic design allows you to sit the camera beautifully on your shoulder. It’s surprisingly lightweight and much easier to hold and move with compared to most other cameras. This was a huge advantage as both films were almost entirely shot handheld. 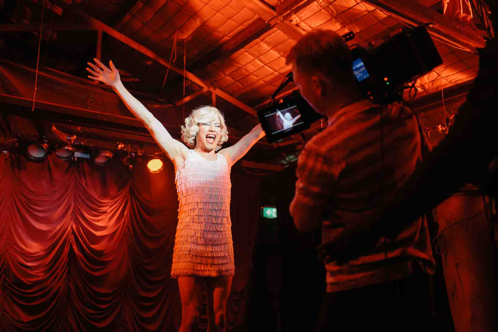 While shooting the cabaret scenes on Show Boy we saturated the set in red, both in terms of art direction and lighting design. Employing so much red can occasionally prove to be a nightmare for digital cameras to handle as they can sometimes produce nasty bleedy soft images – but the F65 owned it like a boss.

The F65’s image sensor is the first of it’s kind and quite simply in a class of it’s own.The 20 million photosites of the F65’s 8K sensor delivers a potent imaging advantage and has a wider colour gamut than film as well as 14 stops of dynamic range – similar latitude to film but with a far better signal to noise ratio.

“Its ability to shoot 4K RAW (17Gb/pMin) or RAW lite (11Gb/pMin) with 16bit digital processing is just awesome. One must be prepared for serious amounts of data too. We were running a relatively new MacBook Pro laptop with a solid-state hard drive and thunderbolt/USB3 links which made life very easy. However try to use USB 2 or Firewire 800 and the process does become slower.” 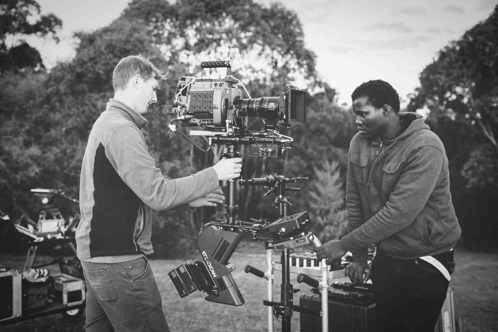 The F65 also has a wide range of full HD 1920×1080 MXF file options in S-Log 3. You have the choice of – Low (Low 220Mb/sec), medium (Std 440 Mb/sec) and high (HQ 880Mb/sec) data rates, which allow you to be able to work the camera suitably for any job at hand. I generally shoot all my TVC and Music Video work in the HQ setting. At the high range HD (880Mb/sec) you get almost 2.5 times the bit rate of any other HD camera on the market. It’s much more information to work with and the results are stunning.

One drawback with shooting in HD is that it’s limited to 60 fps yet in 4K RAW you can shoot at up to 120 fps. This is a bit unorthodox as most cameras reduce their max frame rates as they go up in quality. The limit of 60 fps in HD is the only thing about the F65 that I find annoying.”

Grey Bull is a short film about Martin, a South Sudanese refugee living in Australia negotiating his ancient culture in a foreign land and modern world. The film, written and directed by 2013 VCA Directing graduate Eddie Bell, is a powerful one and one that Green is particularly proud of.

Green said, “Grey Bull was shot in Nathalia, a beautiful riverside Victorian town situated about eight hours drive from Sydney or three hours from Melbourne with as population of approximately two thousand people. During the five-day shoot it felt like every one of those two thousand people came together to be part of the film. It was incredible. Part of the reason we shot the film in Nathalia is that it’s where the bulls and bull trainers were based.

One of the more dangerous scenes on Grey Bull involved Martin walking through the empty town at night with an unrestrained 1200kg bull by his side. There was no lighting other than country street lighting as it may have startled the bull, so we shot everything with natural and available light. Again, as with Show Boy, the F65 performed brilliantly. We shot this scene at 2000 ASA, 50 fps and a 180-degree mechanical shutter. It came out beautifully saturated, nice and sharp – or as sharp as you can get when shooting almost wide open on MkIII Super Speeds, and with hardly any grain too!” 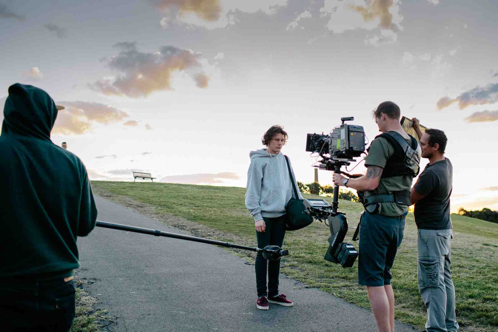 “The F65 is hands down amazing in low light situations. All of our nighttime exterior scenes for Show Boy were shot without any additional light. We shot the both Grey Bull and Show Boy‘s night exteriors with available street ambience between 1600 and 2000 ASA. To be honest I couldn’t tell the difference between that and the F65’s native 800 ASA, which was our base ASA for all other scenes. It looked perfect even when projected in 2K on the big screen. The F65’s rotating mechanical shutter (11.2 – 180deg) performed brilliantly and provided both films with filmic natural images especially during our more fluid handheld scenes. You can also disengage the mechanical shutter if you like which then allows you to have 11.2 – 360 degrees of electronic global shutter at your fingertips.”

He added, “The Sony F65 is the Rolls Royce of cameras. I genuinely believe there won’t be another camera built like this again. It is so powerful, almost too powerful for its time. However having been around for a few years now and with the explosion of 4K production, the F65 has definitely come into its own. There aren’t many digital cameras you can say that about, especially three years after their release. The anamorphic side of the F65 is fantastic as well – you get more horizontal resolution than any other camera and the internal NDs (0.9-1.8) are a blessing. If I had the choice I would choose the F65 every time. The post workflow on the F65 is particularly easy too now days with all major edit applications as well as all leading 2D and 3D post systems now reading the HD and 4K RAW footage natively. For our colour grade on Grey Bull we chose to go with “Crayon” in Melbourne where their Senior Colourist Dan Stonehouse resides.

For Stonehouse Grey Bull was quite a unique experience and as a colourist who has had a significant amount experience of working with material shot on Sony’s F65, he was particularly keen to highlight the benefits of working with the camera on Grey Bull adding, “From a practical standpoint working with the F65 is very easy. Resolve sees the MXF footage the same as any other video file. On Grey Bull the format seemed robust and played back easily.

From a creative standpoint, it was a pleasure. I’ve constantly been impressed with F65 footage, and this project was no different. As a colourist, you tend to think of formats in terms of “feel” – is this footage pliable and flexible, can I get it to do what I want to do? Or is it fragile, does it behave unexpectedly, does it tend to break under pressure – noise, banding, or simply look unpleasant and not easily take grades? I found the images from the F65 to be a pleasure to work with – it has a very beautiful cinematic quality, and the large amount of colour information captured by the camera’s high bitrate means that there is plenty of information to push a shot around into many different places.

I enjoy grading the F65 a lot, to the point that I feel excited when I hear that it’s going to be used on an upcoming job. As a colourist, it’s a joy to work with.I find its low light performance to be especially good – which stood out on Grey Bull as there was a lot of night and dark scenes lit practically. Filmmaking is all about creative people coming together and creating something much better than the sum of its parts. Grey Bull turned out to be one of those jobs. A true pleasure.”

With a unique improvisational acting style at the heart of the Netflix original film, Paddleton, capturing audio was of paramount concern for Sound Supervisor…