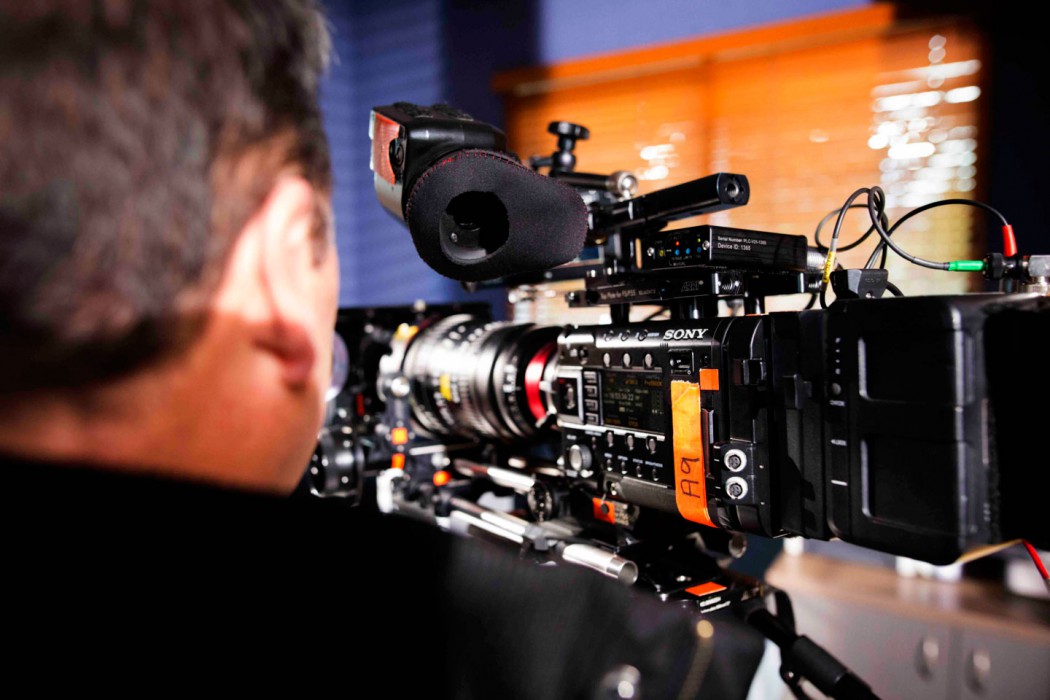 Australia’s longest running soap opera Neighbours has become an iconic glimpse into the sunny beaches and backyard BBQs of Aussie life. It began broadcasting back in 1985 and at it’s peak, during the Charlene (Kylie Minogue) and Scott (Jason Donovan) years, the show ammassed an international audience that outsized the population of its home county.

Neighbours not only launched the careers of Minogue and Donovan, but also those of co-stars Guy Pierce, Margot Robbie, Natalie Imbruglia, Alan Dale and Delta Goodrem. Recently the show moved to shooting with Sony PMW-F55 large sensor 4K cameras.

Steve Scoble, Location DoP for production company Fremantle Media has worked on the show since 2006 explained, “The Neighbours location unit had previously been using Sony XDCAMs and they were nearing the end of their lifecycle. A search began for new cameras that needed to satisfy more technical and creative options to facilitate fast moving tightly scheduled drama. Research was conducted on a variety of cameras available.”

“We also needed a camera system which was durable, stable and resistant to both heavy use over prolonged periods and the sometimes-extreme Melbourne environmental conditions, especially on exterior locations.”  added Gary Scott, 1st Assistant Camera Location Unit.

Scoble and crew decided to go with the F55’s third-generation 4K S35 CMOS sensor as the current 2/3″ PDW-700 was getting a little old and unweildy to use. The team use two F55s on location and bring in an additional camera when needed.“Bearing in mind we had chosen to go with 30-300mm, 30-105mm and 15-47mm cine zoom lenses to cover all our needs, the F55 ticked off all of our requirements for shooting Neighbours.” said Scoble. 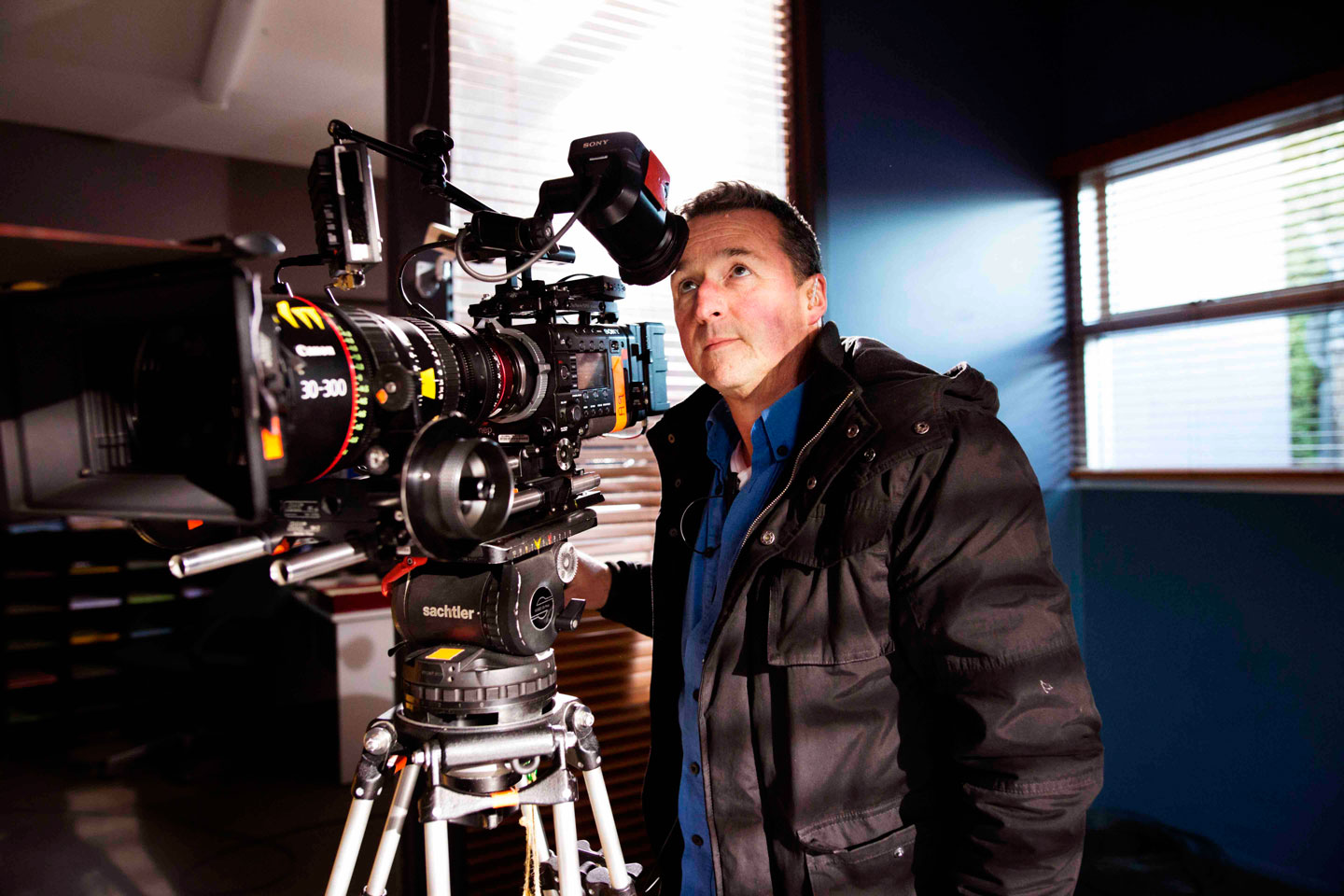 Neighbours DOP Steve Scoble and the F55 camera on the set of Neighbours (image: supplied).

There has been huge developments in camera systems shooting for television over recent years, largely due to the increased consumer demand of 4K tv sets that require content. Most new tv sets these days have UHD resolutions, even if it was somewhat gimicky to start.

This means more and more production companies are purchasing the larger 4K S35 sized sensors, which can record in a range of formats and resolutions, from the current HDTV 1080 format up to full 4K. Additionally, a single CMOS S35 sensor exhibits increased ISO speed, colour resolution and gamma range, when compared to 3 CCD prism systems.

Scott continued, “With this in mind both the increased speed and increased gamma range of 14 photographic stops as opposed to our previous 5 or 6 are huge advantages when using the F55 in terms of technical and aesthetic results.”

The crew have been using the cameras for six months and the F55 has performed beyond their expectations. The advantages being the imporoved contrast ratio, variable framerate, integrated ND filters, global shutter, improved ASA rating (currently able to shoot 4000 ASA without noise) and the sensors ability to handle extreme highlights, particularly compared to the previously used XDCAM.

Despite being able to shoot in 4K, the crew needed to maintain a seamless technical and aesthetic image match with the studio camera footage, so it was decided to shoot with XAVC HD 1920 x1080 at 25p.

Gary Scott added, “The F55 has a number of specific features that helped us improve the look of the show including, as mentioned previously, integral rotating ND filters, which are extremely useful in the variable lighting conditions routinely experienced on Neighbours locations. Also the familiarity and system compatibility of Sony cameras is very helpful in ensuring a smooth transition for the crew.”

The post production workflow has also seen improvements too, as Post Supervisor Caroline Scott explained, “It is now easy, streamlined and has vastly improved our timeframes, making things much quicker than how we did them last year. We have managed to streamline the process in a number of ways including our ability to Avid AMA link and transcode footage, rather than import from XDCAM. Also, the invaluable use of upgraded Ambient ACL 204 Lockit boxes with a programmable offset has enabled us to auto sync and multi-group audio and vision clips with a synchronised source time-code, as opposed to manually matching each slate.”

3rd Assistant Editor Rebecca McPherson added, “What once took an Assistant Editor approximately 3.5 hours per day to process and distribute rushes, we now manage to do in 1.5 hours. Next year with the addition of the new Avid DNxHD codec hardware upgrade available for the Sony F55 camera we aim to record in a native Avid codec allowing us to improve on our ingest timeframes.”

The new cameras have been a successful addition to the location crew’s kit. As Scoble concluded,  “In general the cameras are in use five days a week, with ten shooting hours per day and in weather conditions which are often unstable. The cameras are reliable, sturdy and can take the heat, the cold and rough and tumble of fast turnaround shooting. After six months we are really happy with the Sony F55 cameras.”