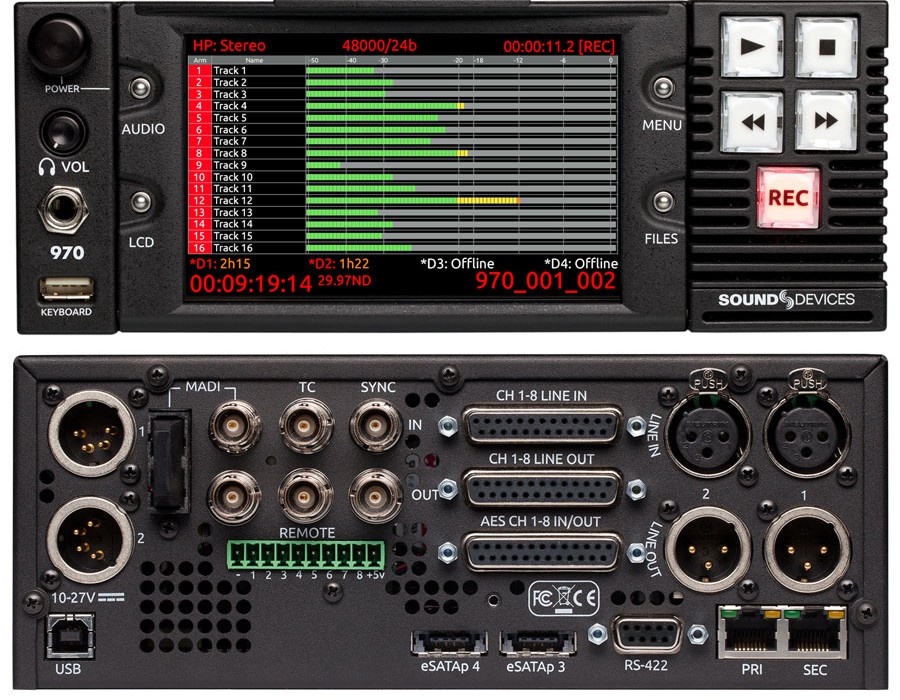 The 137 AES convention begins this week and it’s shaping up to being one of the most popular years in the events history. Sound Devices 970, will be debuting its first-ever dedicated audio 2U rack-mounted recorder/player, designed for high-track-count audio recording such as the capture of multi-channel sound for large-scale live performance and acquisition of dialogue for TV and film

The 970 records up to 64 channels of monophonic or polyphonic 24-bit WAV files from any of its 144 available inputs. Including 64 channels of Audio-over-IP using Dante, 64 channels of optical or coaxial MADI, 32-track recording at 96 kHz, eight channels of line-level analog and eight channels of AES digital. The device includes four drives for recording, two front-panel drive caddies and two rear-panel e-SATA connected drives, which can record sound simultaneously or sequentially, including metadata editing.

It also features Sound Devices’ FileSafe technology, which automatically detects and repairs corrupted file headers when drives are mounted. FileSafe works by writing data to a proprietary file format, using an ‘.sda’ extension. When a recording ends, files are automatically “finalised” by converting the ‘.sda’ files to standard ‘.wav’. If for some reason the files can’t be ‘finalised’, due to power loss or drive disconnection, they still remain intact on the drive. Files are recovered by reinserting the drive or via FileSafe Mac or PC utility, which is available as a free download (here).

The device also comes with a five-inch screen, full scale metering of up to 64 tracks and can be controlled via RS-422, GPIOl, or a Web-based control panel for remote transport and setup/transfer control.

Lockit time-code technology allows the 970 to operate as a master clock and can also slave or be jammed to any other time-code source, along with support for external synchronization from word clock, MADI or AES (SRCs are available for all MADI, Dante or AES inputs).

There’s no word as yet on how much the 970 will put you out of pocket, or when it will be released. Once a release date has been announced, we’ll let you know.