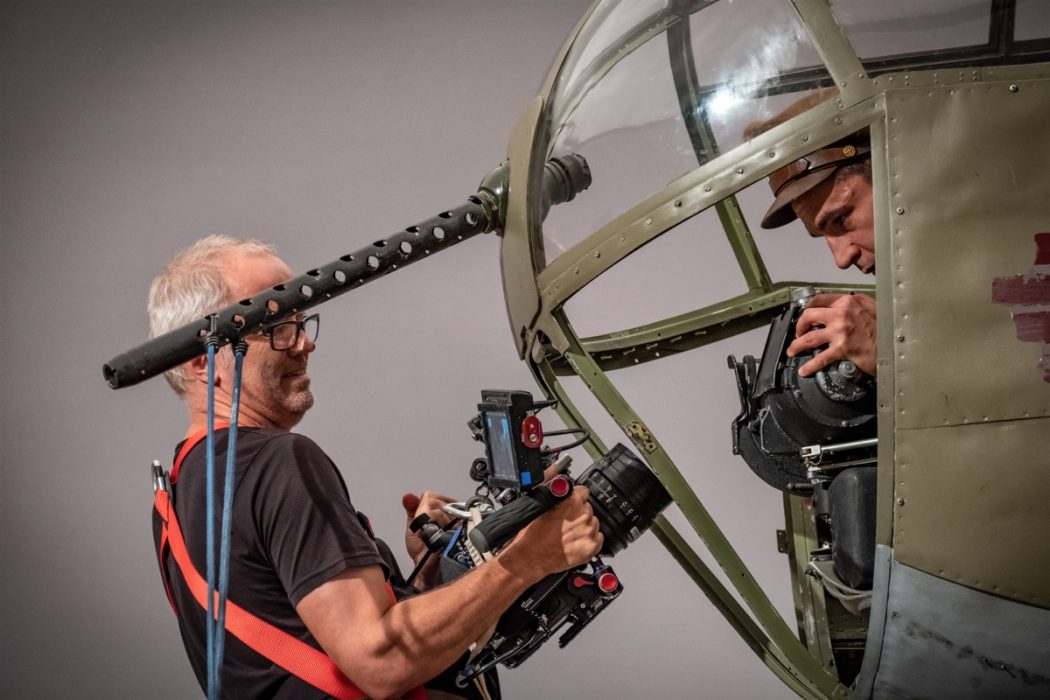 Based on the acclaimed Joseph Heller novel Catch-22 is set during World War II and revolves around a military by-law which states that if you fly your missions, you’re crazy, and all you have to do is ask not to fly them. But if you ask not to, then you’re sane, and so you have to fly them. The book’s title coined the term that has entered the common lexicon since Heller’s book was first published in 1961.

One thing that was made clear was that it would be its own film, and not based on the 1970 version. “We all looked at the original film, and the two projects have a different nature,” said Ruhe. “Ours is a dark comedy with a strong look for a strong visual story, as compared to the original which was more of a straight comedy. The aerial scenes had to show the intense horror of being up in those small tin boxes. It had to be about life and death.”

“We had two sets of camera/lens combinations as we were cross shooting as well as having some days with splinter [second] unit shooting,” explained Ruhe. “While I used all of the lenses, the 32mm was my all-time favourite for close-ups inside the planes. Although, to be honest, I did have to move to the 50mm at times due to the limited space within those planes.”

In fact, one of the main benefits of using Cooke S4/i primes for Ruhe was their size. “I had to be very fast and versatile in tight places. I didn’t want to get stuck fighting minimal focus, and thanks to the S4/i’s, I didn’t,” he added.

To help understand the period, Production Designer David Gropman provided a lot of stills from Heller’s regiment to show the team what life in those camps was like, along with viewing historical newsreel footage. Then, during camera tests, stills were taken and placed into Photoshop to match the old postcard look of the era. Company 3, which would handle the digital intermediates, then created LUTs for the cameras to match the required looks.

With more than 20 years of experience with Cooke lenses, Ruhe knew from the start that he wanted the S4/i primes. “I first grew attached to Cookes on commercials, and I shot The American with S4s as well as The Keeping Room, where I also used original Cooke Speed Panchros,” he said. “They are just beautiful in the way that they fall off, how they flare and the texture you get from them. This is especially important when shooting in digital, as the lenses give you a nice organic feel. There’s just something so beautiful about the Cookes, and I go back to them time and time again. And the close-up with the 32mm is just the perfect tool.”

For both the ground and aerial scenes, Ruhe went for a natural look. This was especially important on-board the planes as he didn’t want them to be too perfectly lit. For ground interiors, a 120’x75’ soft sail and grey screen was used with a 20K standing in for sunlight.

“You want people to feel the heat of the day,” explained Ruhe. “We worked with hard contrast; blow out when inside the tent looking out. I think this looked quite natural, as I wanted to convey the feeling of heat.”

For Ruhe, one of the standout scenes for the S4/i was in episode six. “I don’t want to give away any spoilers, but there’s a scene that was entirely shot with the 32. It’s so close to the faces and so intimate, which I love. You’ll have to see it to understand it, but every DP out there will know what I’m talking about when they watch that episode. It just looks great.”

Vincent Laforet’s two-day event Directing Motion which toured extensively across the USA, is now making it’s way to Sydney and Melbourne this July. Laforet is one of…