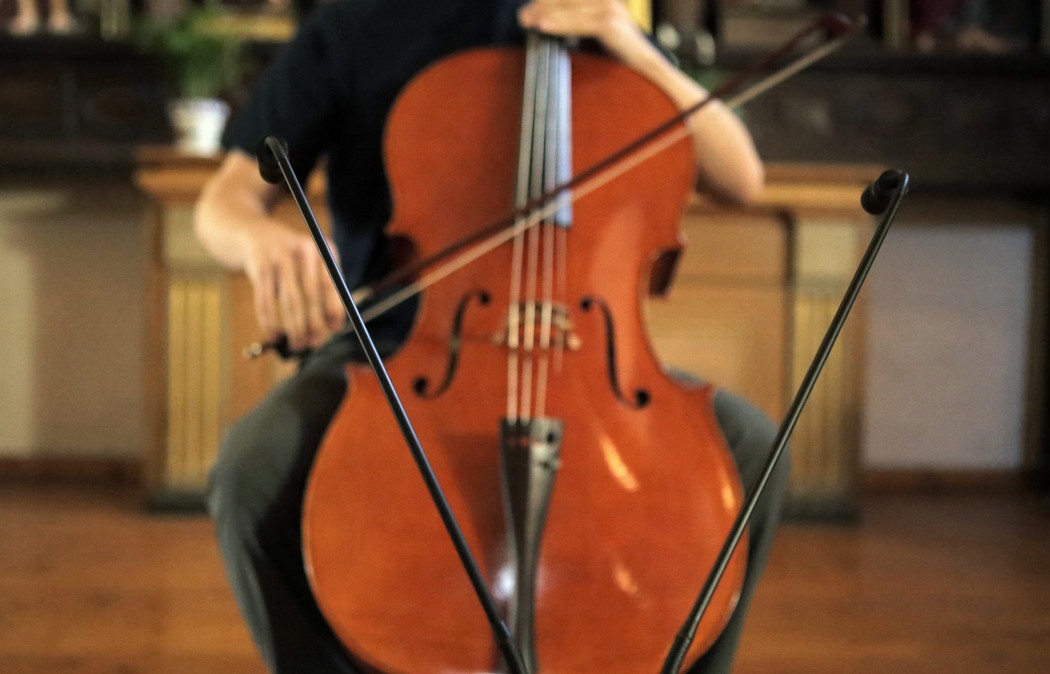 New York-based Cellist Dane Johansen is embarking on The Walk to Fisterra, a 600-mile musical/walking journey along the Camino de Santiago, a popular pilgrimage route through France and Spain. Over the course of his six-week journey, which began May 14, Johansen will stop at several of the 36 historic churches along the Ancient Roman footpath, where he will perform Bach’s Six Suites for Unaccompanied Cello, while a team of filmmakers and music producers capture content for a stunning documentary about the pilgrimage. To ensure the highest quality audio, sound engineer, Kyle Pyke, and Grammy Award-winner, Jesse Lewis, who is the music producer and co-sound engineer on the project, are using several pieces from DPA Microphones’ product line. 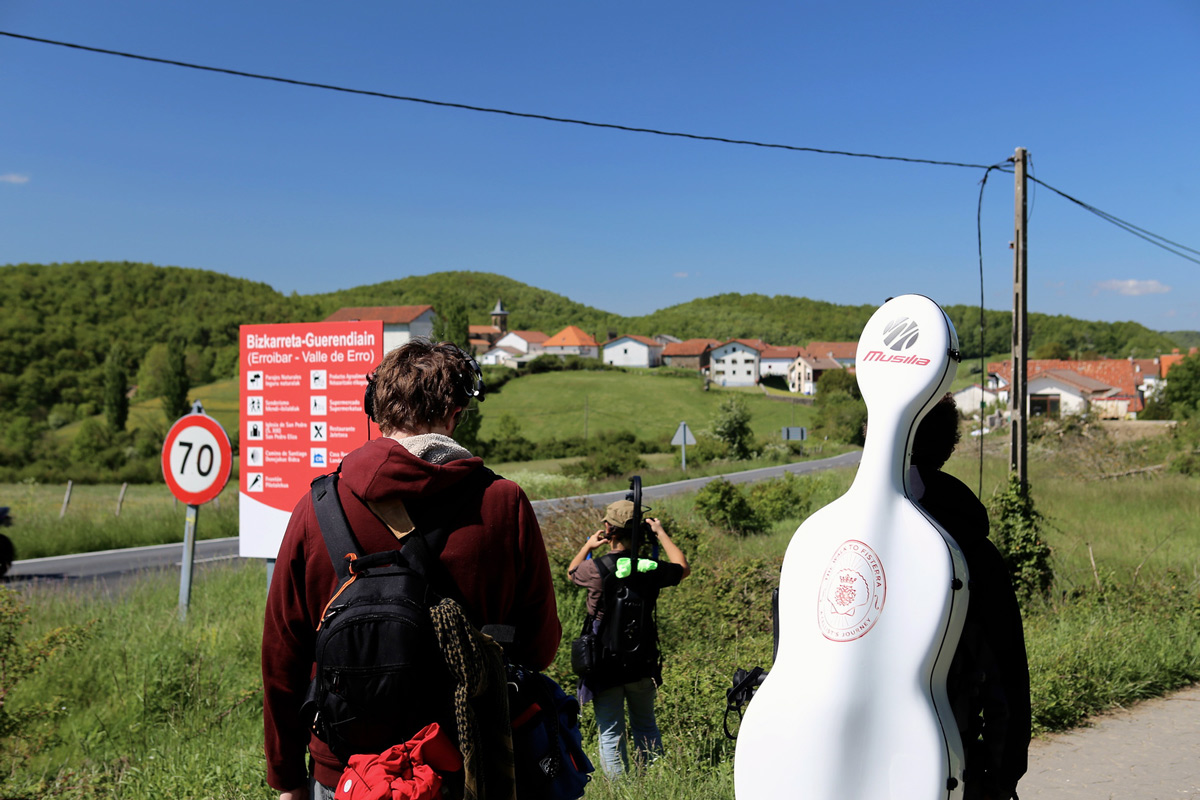 Included in their audio arsenal are d:dicate 4007A Omnidirectional mics for location recording and a combination of d:dicate 4011F Cardioid Podium and d:vote 4099 Instrument mics for close-pickup of the cello. A variety of d:mension 5100 Mobile Surround and d:dicate 4017B Shotgun mics are being used to capture ambiance along the trail, while d:screet 4061 Miniature mics pick up dialogue.

“DPA was our top choice for microphones to record the audio for this journey,” shares Pyke. “When we were spec’ing out what we might need for the project, we enlisted DPA Microphones to be our exclusive mic partner. The reason is pretty simple, not only does the company’s catalog offer everything we could hope for, and more, in terms of microphone quality and detail, but DPA itself embodies an open, adventurous approach to pushing the industry forward, which is an intrinsic quality of The Walk to Fisterra.” 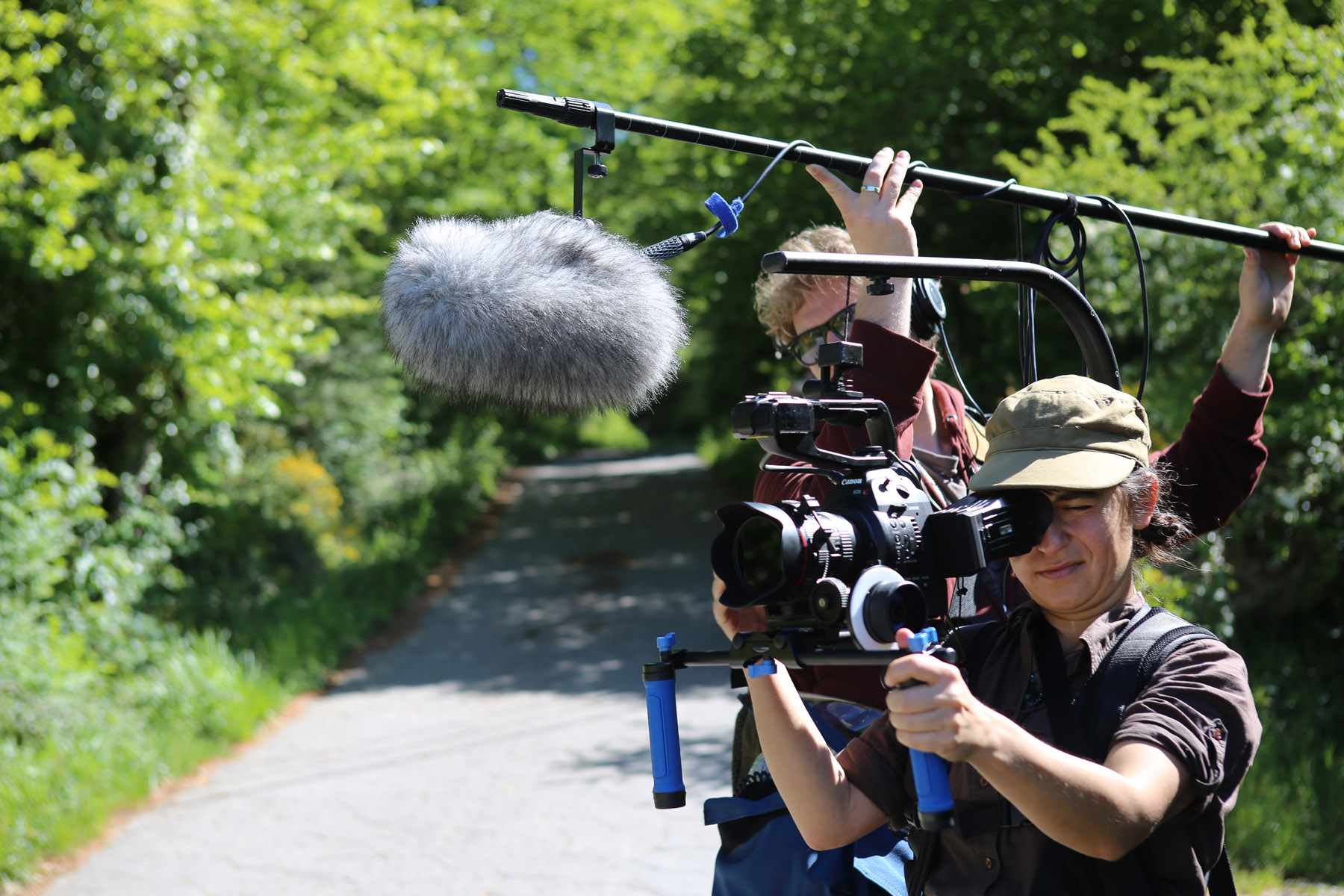 Shooting on Canon EOS C100 with a DPA ddicate 4017B on boom (photo: Kayla Arend)

As Johansen performs at churches along the route to Fisterra, his team will produce recordings and sound maps of each location, which Lewis can then use back in the studio to recreate the audio during film screenings or as background for Johansen’s live performances.

“When we are on the road in often less-than-ideal acoustic environments, it’s important to make sure that nothing is lost due to noise or lack of detail,” continues Pyke. 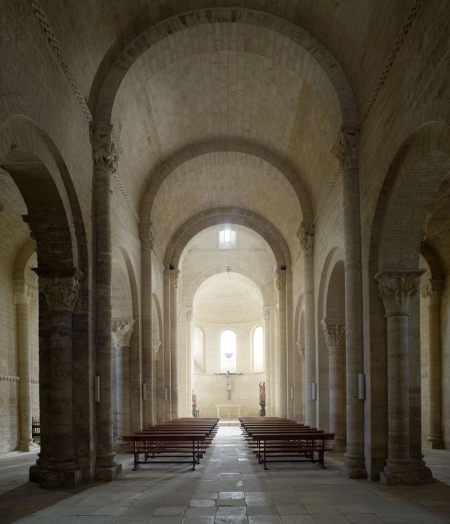 To prepare for any unique audio challenges that they may encounter at the older venues, Pyke will rely on the cardioid pattern of the DPA d:dicate 4011F and d:vote 4099 mics, to capture sound directly off the instrument. The 4011F, will highlight the sound around the cello, while the d:vote 4099 will be mounted directly on the cello to accurately record the instrument while removing any unwanted noise. Pyke also plans to use his Omni mics to capture in surround sound the reverberations produced by the instruments in the churches, which have an antique architecture that offers unique acoustics. The setup uses a decca tree in front, with two mics spaced at a variable distance and width, to give a sense of depth between venues.

“When you consider the stakes of this task, accuracy is paramount, and every recording must be immaculate. If a recording comes out less-than-brilliant, the nuance and subtleties of the performance within the space are lost” shares Pyke.

Along with the DPA mics, the pair are using the Horus audio interfaces, as well as a copy of Pyramix audio recording software.

“These tools comprise the foundation on which the rest of our setup depends. Fundamentally, the interface is the device that translates sound as an electrical signal coming from a microphone into a digital file that can be recalled at any point…the Horus has a direct impact on how well every performance will be interpreted and preserved. We have used these tools over the past three weeks and every performance has been captured with nuance and subtlety completely intact. While there is no way to perfectly recreate a concert or a recording session, this has allowed us to come as close to preserving those experiences as possible.” 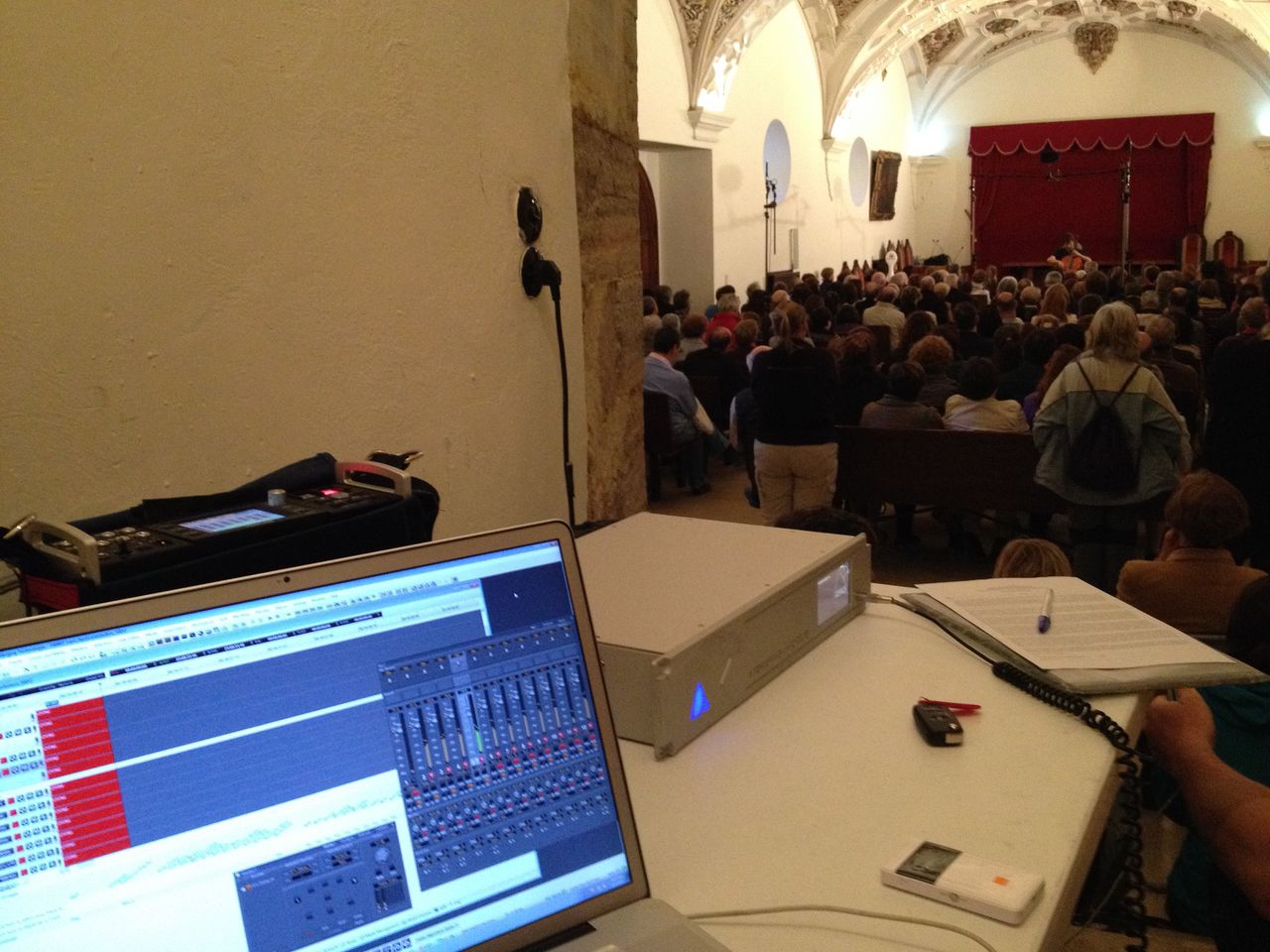 “The 4007A’s flat response across the frequency spectrum is the perfect tool for capturing the true sound of the hall in both musical recording and impulse responses,” shares Pyke.

In order to ensure the recordings offer listeners a true sense of the experience, Pyke must also capture dialogue and the ambience of journey along the Camino. To produce the best results, a combination of a d:mension 5100 Surround, 4017B Shotgun and several d:screet 4061 Miniature mics will be used.

“One concert at a time, we are slowly building our experience along the Camino de Santiago, and preserving it in audio, for future listeners.” says Pyke. 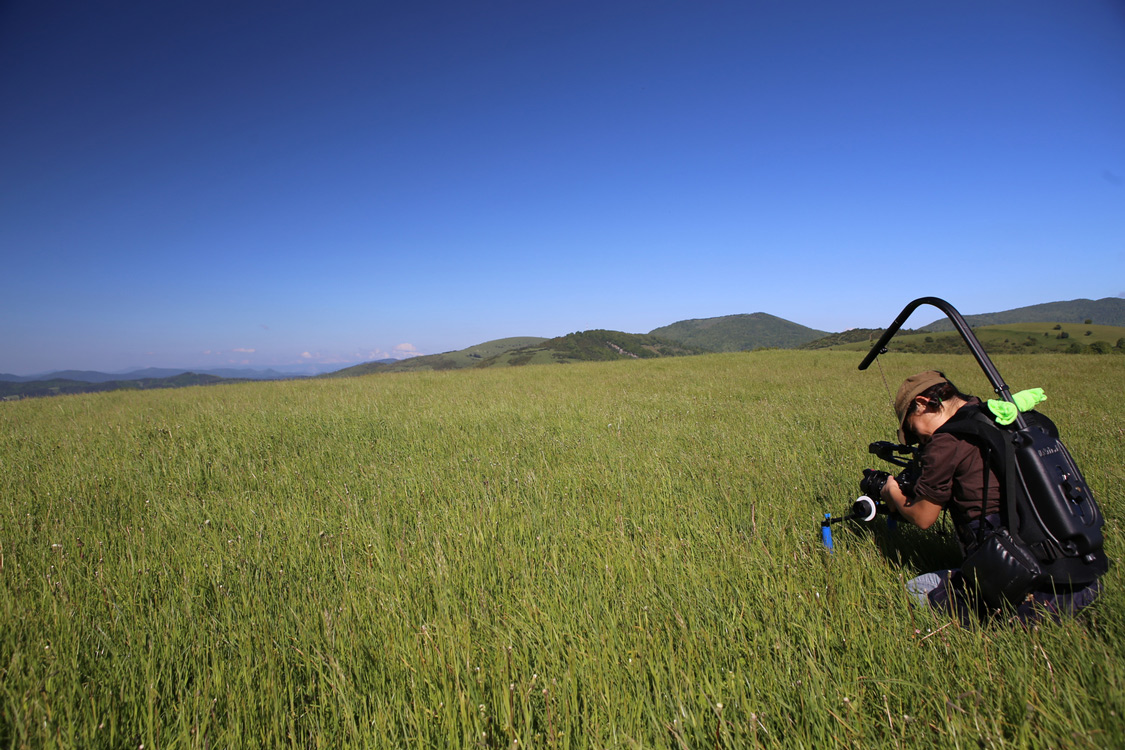 I the field (photo: Kayla Arend)

The Walk to Fisterra was inspired by Johansen, who feels the voyage is symbolic to his relationship with music. The dedication needed to perfect the Bach Suites requires an artist to continuously pursue a singular goal and therefore is like a pilgrimage, endless and requiring extreme effort, daily commitment and absolute resolve. Johansen and his team hope the performances of Bach’s music and visits to mentor young cellists in schools along the Camino during The Walk to Fisterra, will inspire the communities as they speak through the universal language of music. 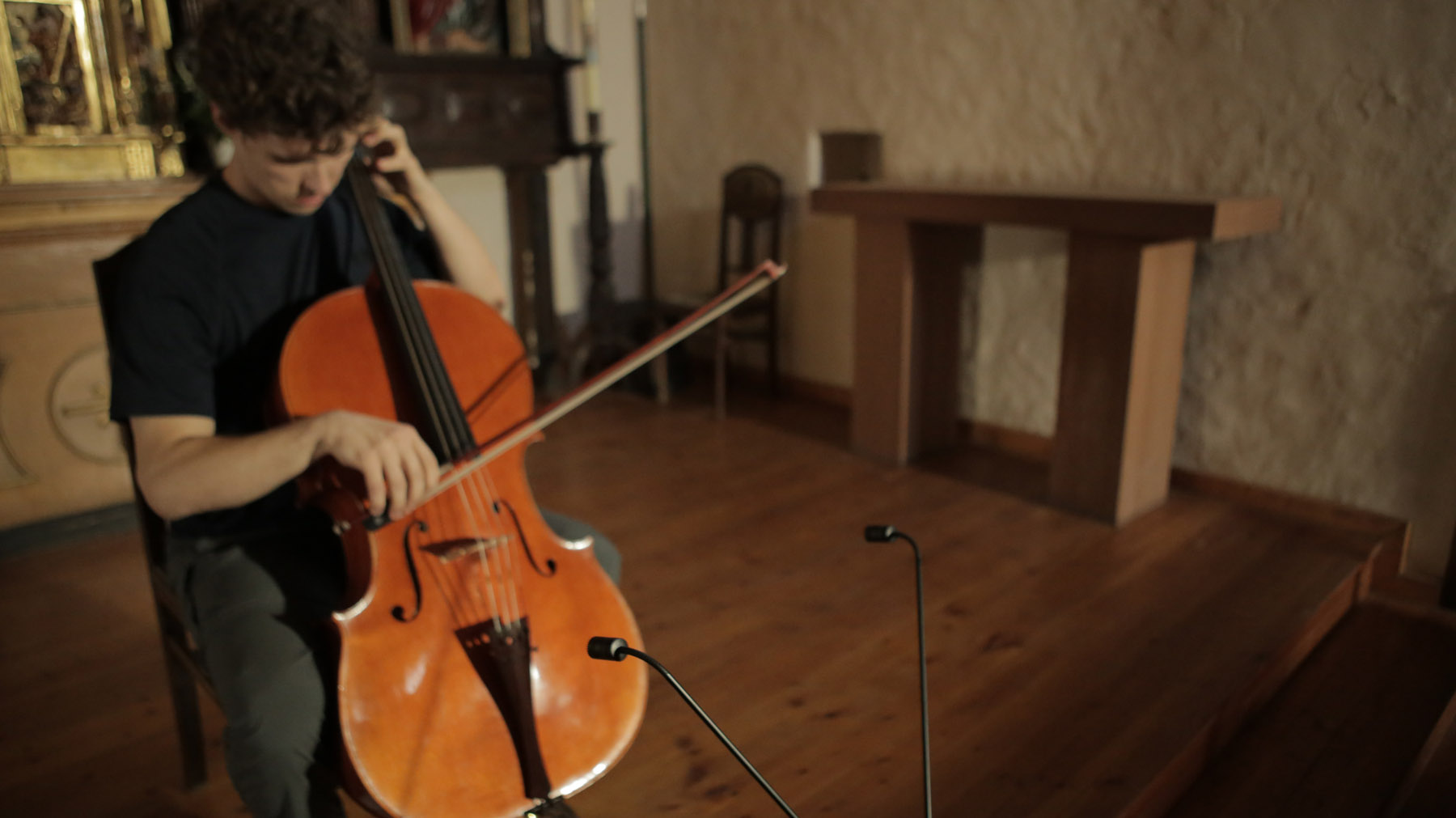 Johansen performs throughout the world as a soloist and chamber musician and he is a member of the Chamber Music Society of Lincoln Center. He made his Lincoln Center Debut performing Elliott Carter’s Cello Concerto with James Levine in celebration of the composer’s centennial and his Carnegie Hall debut in 2012, performing a program of his own design entitled Lightness, which explored philosophical lightness in music of the 20th century.

El Camino de Santiago, an ancient route to Santiago de Compostela and Fisterra on the western edge of Europe, was originally a Pagan footpath that was later appropriated by the Romans as part of their campaign to Christianize Spain. Still journeyed by those seeking to challenge their bodies and minds, the path features roads, monasteries and cathedrals along the route to provide pilgrims with areas of rest.

Filmmakers, set your computers to Download Speed Mach 4. As the good news today out of Colorado Springs is that Convergent Design’s Odyssey7Q capability…