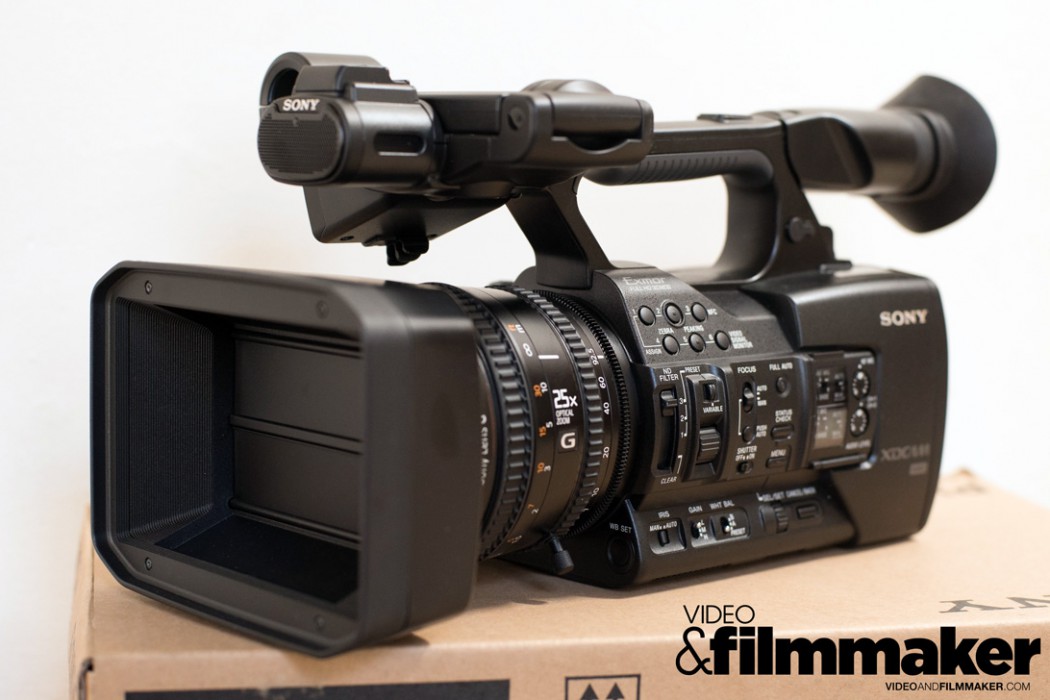 In the constant flurry of releases from Sony, the PXW-X180 and the PXW-X70 are two camcorders worth noting. Both cameras live in Sony’s packed XDCAM range.

The X180 is a professional camcorder. Suitable for news gathering, documentary and professional corporate work, some of its predecessors are the PMW-150 , HXR-NX5P and the older PMW-EX1 and EX1R. The X180 has none of the bulk but nearly all the abilities of a much larger ENG camera: XLR-ins, professional broadcast ready formats and a serious zoom lens.

The second camera in this review is the X70. Sharing most of the functions of the bigger X180, the X70 is the first compact camcorder in XDCAM range, ground-breaking in its combination of small size and unusually large image sensor. Unlike most camcorders the X70 has a relatively large 1-inch sensor. It weighs in at the bantam weight of 1.4kg, while still having the XLR-ins and the flexible zoom lens of a professional camcorder. 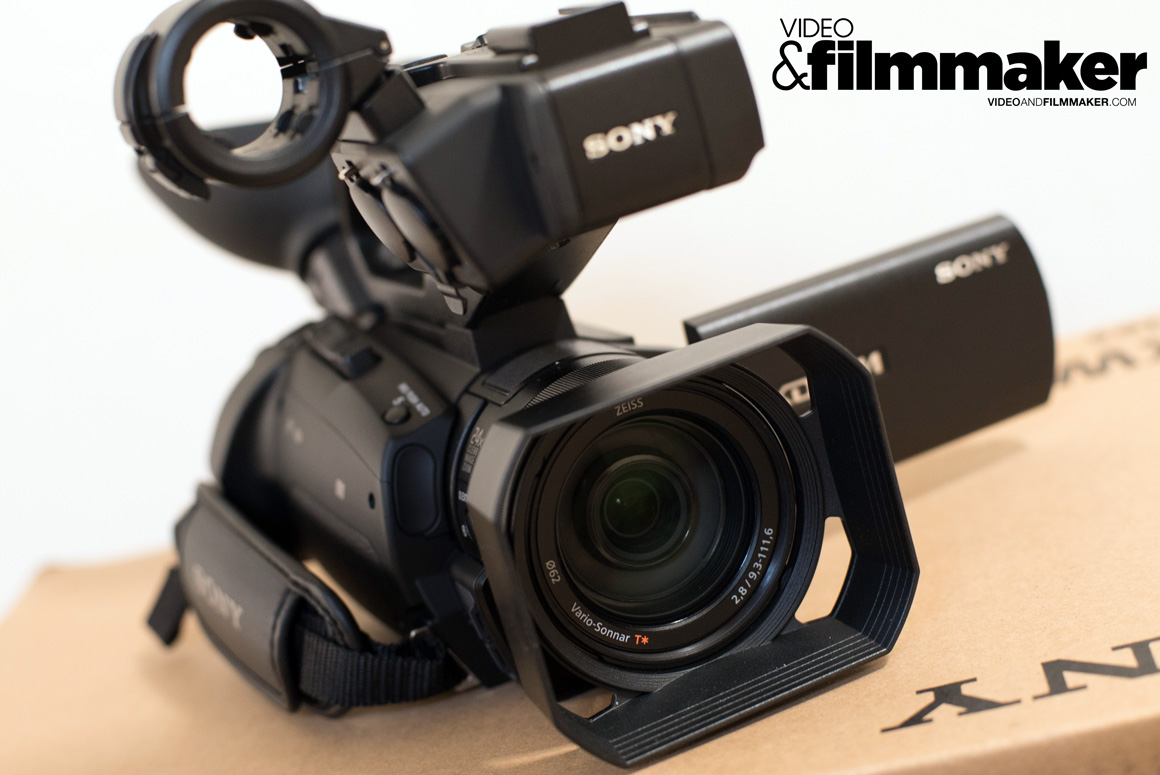 The X70 has a shallow depth of field compared to other camcorders. Its sensor is slightly larger then Super 16 film. This size allows for a more expensive look that cuts better with large sensor cameras. Operating the focus is a little more fiddly than normal camcorders but peaking and focus magnifying helps.

The big sensor also seems to aid its low-light capability; 9dB gain on the X70 was good and higher gain levels were noisy but useable if under the pump.

Another major feature is the X70’s 4k resolution sensor. 4k recording isn’t released yet (Scheduled for 2015, a paid upgrade from Sony) but the camera does utilise the extra resolution already. A resolution punch-in option (the Clear Image Zoom) makes the camera sample the centre of the 4k sensor, recording true 1080p and thereby giving extra zoom.

The X70 has a 12x Optical Zoom on its fixed Carl Zeiss Vario Sonnar T* lens, which can be doubled by the handy Clear Image Zoom feature to a 24x Zoom. In a pinch you can double that again to 48x with a Digital Extender, a traditional digital zoom on the image which lowers the image quality slightly.

X180 has a fixed Sony G lens with a staggering 25x Optical Zoom, the 35mm sensor equivalent of a 26mm to 650mm zoom lens. The X180 has a small 1/3-inch chip size. This gives it a large depth of field and even wide open it can be hard to put objects out of focus. On the surface this could be a negative but in the field this large depth of field is quite handy, lessening the struggle to keep focus on unpredictable and fast-moving subjects in an unrehearsed environment. 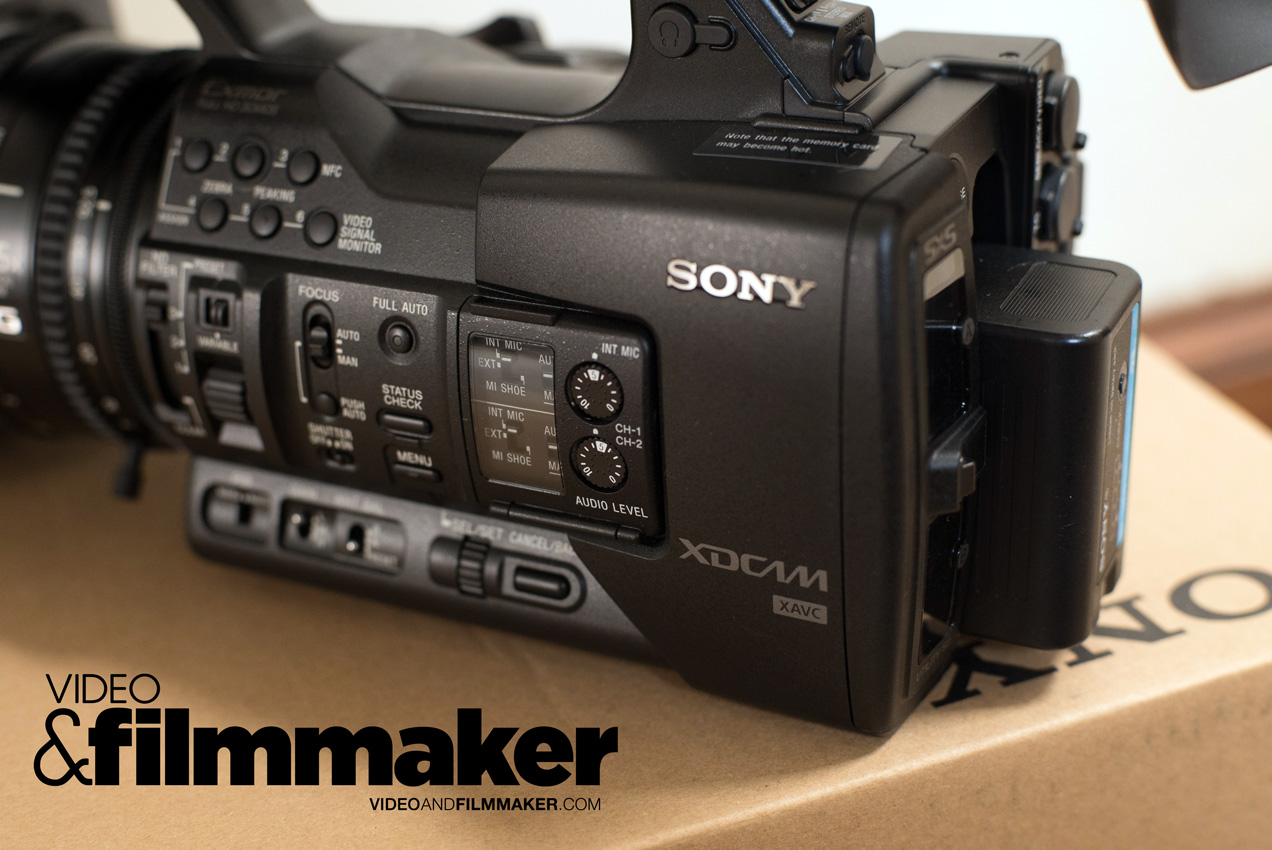 Both cameras contain a host of recording options for different post-production pathways. They both have the new recording format from Sony, XAVC. XAVC is a h.264 codec that produces marvellous broadcast quality pictures while still compressing the files sizes for a manageable post workflow.

The X180’s XAVC-I option (4:2:2 colour sampling, 10-bit with Intra-frame compression at 112 Mbps) is incredibly impressive for a professional camcorder. This new feature helps with creating better colour fidelity, ease of post-production and lessening of compression artefacts. The X180 could handle a chroma-key with ease for a camera at this price point.

The downside to having these new advanced formats is needing faster, larger and thus more expensive cards. The X70 has two slots for SD/SDXC/SDHC cards and the X180 has multiple slots for SXS, SD and XQD. More expensive cards are required for XAVC so don’t expect to use your old EX3 SXS cards. If you can’t afford the cards or the project you’re doing doesn’t require the higher-end format then there is still a host of more compressed formats in both cameras to choose from.

As a side note, both cameras have slow motion capabilities of up to 60 frames per second in 1080p — super handy for sports and documentary pieces. The X180 has the added feature of up 120 frames per second in 720p. To do this the camera samples the centre of the sensor, with the side effect of narrowing the field of view. 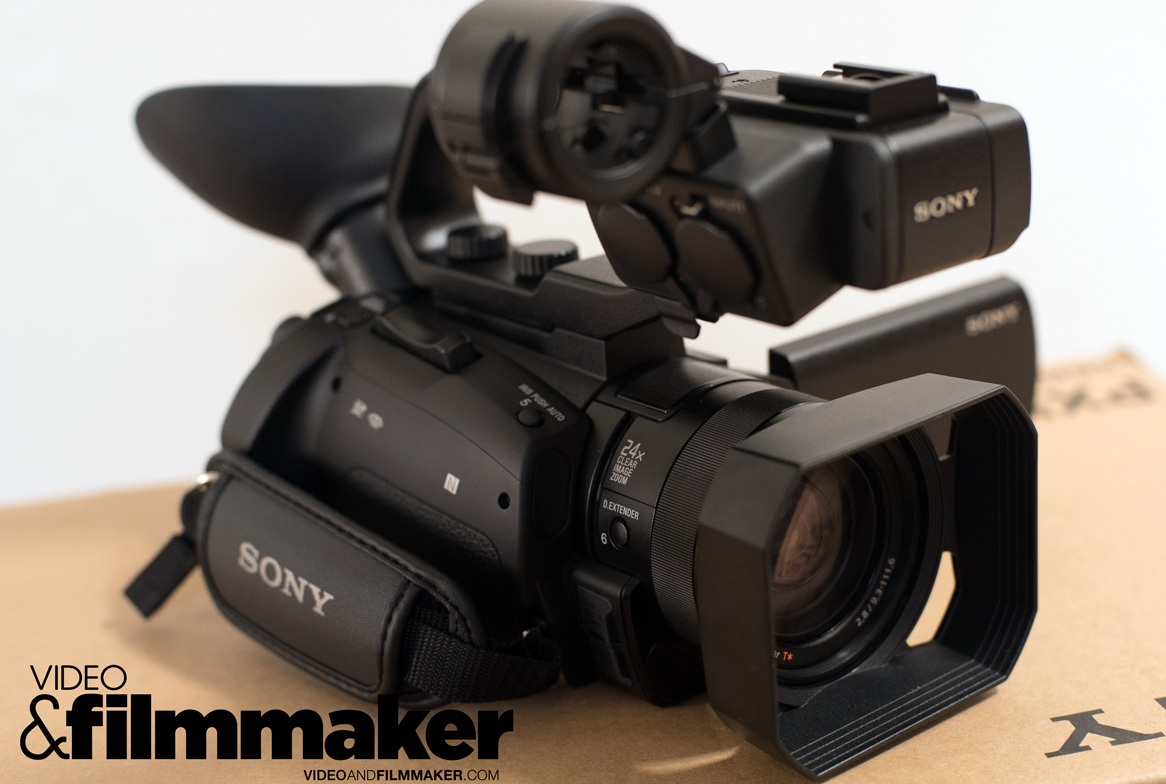 The smaller X70 has less real-estate for button and ring placement, it’s a bit fiddly for my fat fingers. But it still manages to have all-important controls in reach, once you get to know where they are. The menu joystick on the handle is particularly handy. The X70 has only one ring, switchable between focus and zoom. It was a bit uncomfortable at first. I ended up using the rocker on the handle for zoom and the ring for focus.

Although larger and heavier at 3.2kg, the X180’s extra weight isn’t particularly noticeable once tucked against the shoulder for stability. X180’s three separate rings for focus, zoom, and iris are really great for camera operating. Its focus ring also has infinite or hard-stop modes, auto focus/manual override and manual focus respectively. The X180 also has a great EVF, a 1.27cm 1024 x 768 OLED display, specially useful for shooting on sunny days.

Both cameras have an optical image stabiliser, which makes handheld a dream. They also have an “Active SteadyShot” which is a heavier form of stabiliser that slightly punches in on the image and digitally stabilises the shot in camera. It gives some swim to the image; I’m not a big fan of this, but in the event of an earthquake it could be useful. 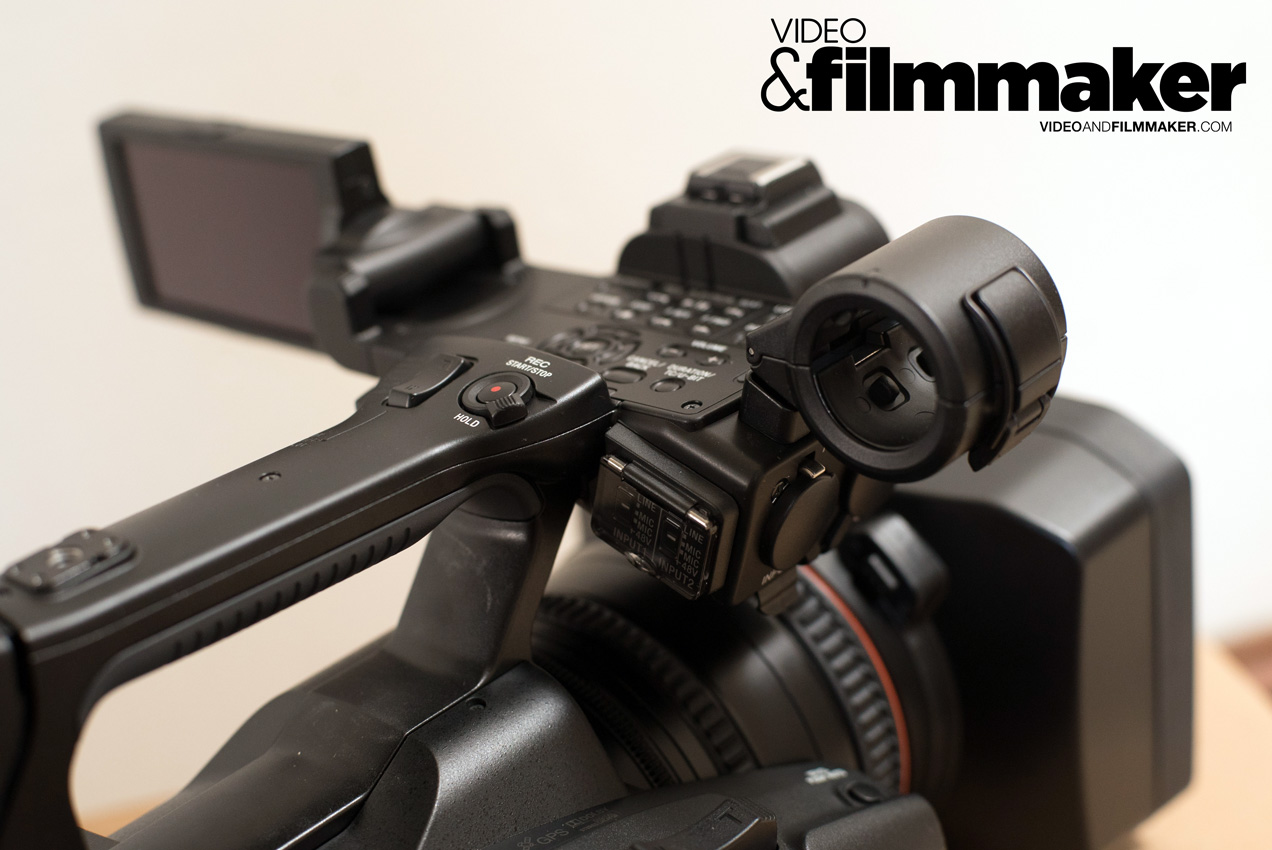 The X70 has a built-in ND filters in 1/4, 1/16, 1/64 strengths. In contrast, the X180 has a built-in Variable ND filter, a useful function for having a smooth dial-able ND rather than large increments. It also has a stepped mode similar to traditional built-in ND.

A handy feature on both cameras is the new Multi-Interface hotshoe. Through the MI-shoe the camera can power and control the HVL-LBPC, an on-camera video light. Another neat option is the UWP-D Series wireless mic receivers, which removes the need for XLR connections and batteries, working directly through MI-shoe. 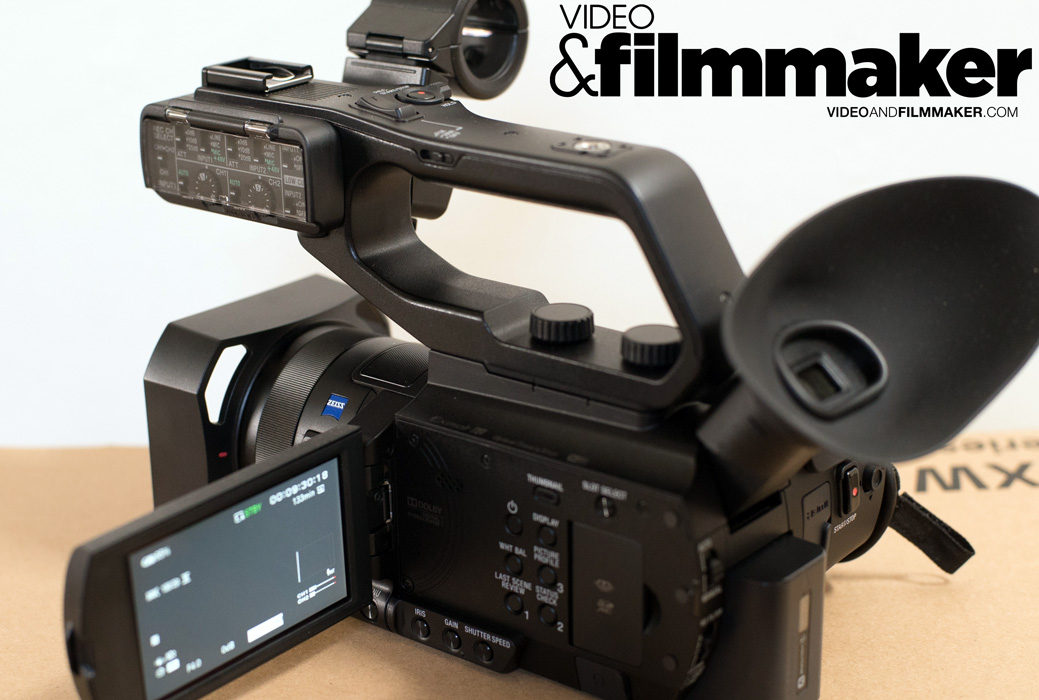 X70 is a great little camcorder and the 4k resolution upgrade in the first of half of 2015 will make it even more feature packed. One of the many uses for the 4k will be to enable post-production digital punch-ins that can help enormously when editing interviews. This combined with its large sensor and XLR-ins makes the X70 an especially handy interview camera. Its small form and weight is useful for long tiring days and without any massive compromises in functionality you can be a lot less obtrusive for fly-on-the-wall documentary situations.

The X180 boasts key upgrades from older professional camcorders: multiple options of robust recording formats, a great EVF, the Multi Interface shoe, and the handy Variable ND. The XDCAM range from Sony continue to be workhorses in news gathering and documentary. A worthy successor, the X180 is the next logical step.

Alongside the release of the X180 is the PXW-X160, its cheaper brother. The X160 is cosmetically the same camera but with the removal of wireless functionality, NFC and GPS.

Jack McAvoy is a Sydney based cinematographer. He freelances on documentary, narrative, and commercial productions. www.jackmcavoy.com

It’s not ‘one number’ better than the NTG3, but with onboard filters, internal battery and a built-in pad, the NTG4+ has plenty going for it….