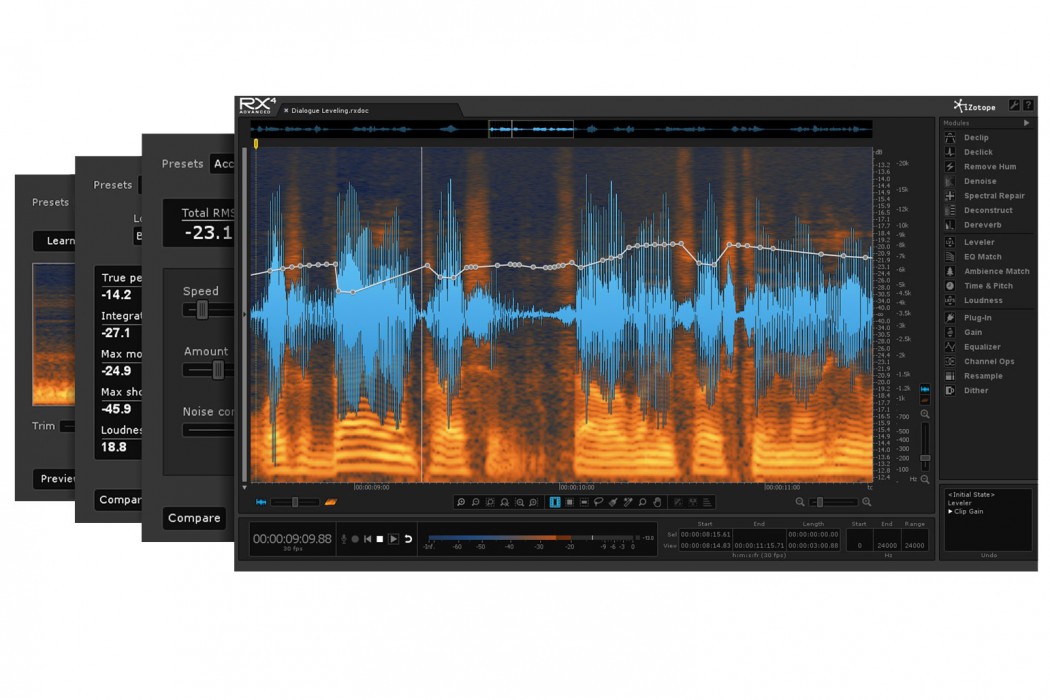 iZotope is well and truly established as a noise reduction force. Now it’s trying to entice RX users further into its standalone app by laying out some new treats.

If you go back a few years, the major names in noise reduction were Sonic Solutions and Cedar. But the price of admission was up there, often north of $5000 and stayed there for years. There were always a few cheaper options from Waves and the like, but none seemed to ‘cut through the noise’ until iZotope debuted its RX suite. When RX came onto the scene with a price tag around $500, the first impression when comparing it to the big names was it didn’t seem to be 90% worse. Far from it, RX produced solid results and soon gathered a massive following. The latest incarnation, RX4 is a suite of diverse plug-ins and a standalone app, but the relationship between the two has changed with this update.

Key to the version four release is a fairly dramatic change in workflow. Although a standalone app has been available for several versions now, many ProTools operators preferred to use Audiosuite inside their DAW for rendering fixes, storing presets with sessions and templates, and preventing yet another application from chewing up processing on an older ‘tired’ computer.

RX4 changes all that with its new Connect system that encourages users to migrate to the standalone app, while still linking into their DAW of choice. I assume this means iZotope will, over time, minimise its host based plug-ins, making RX’s ongoing development simpler. The first big sign of this is the removal of the flagship Spectral Repair Audiosuite plug-in for ProTools from V4. It’s now only available inside the standalone app (although if you are upgrading from an earlier version you can choose to keep that installed alongside RX4 and still access the older Audiosuite plug-ins).

As a long term RX user and ProTools boffin I really wasn’t interested in changing the way I work but a few other aspects of the V4 release enticed me in and I must say I now totally dig the new workflow. If I need to clean something up I hate mousing around for plug-ins so I tend to have a windows configuration for repair, which opens about six plug-ins with settings for common problems in that session.

The problem with this workflow is every time I recall that configuration each plug-in polls the iLok for authentication, taking a little bit of time to open, multiplied by six and it really slows me down. Using the Connect system, I simply click the Send button and switch to the RX standalone app. It can have a stack of RX plug-ins and Audio Unit plug-ins open on screen without needing to re-authenticate each time, making it much faster to switch between. Also it can go full screen so I can use Spaces in Mac OS X to move from ProTools to RX and back very easily, maximising screen real estate. The only trick on sending files back and forth is that your selection must be the same length on returning to ProTools and you don’t have the advantage of Audiosuite handles introduced in PT10, so be sure to grab a bit of surrounding audio before processing if needed. 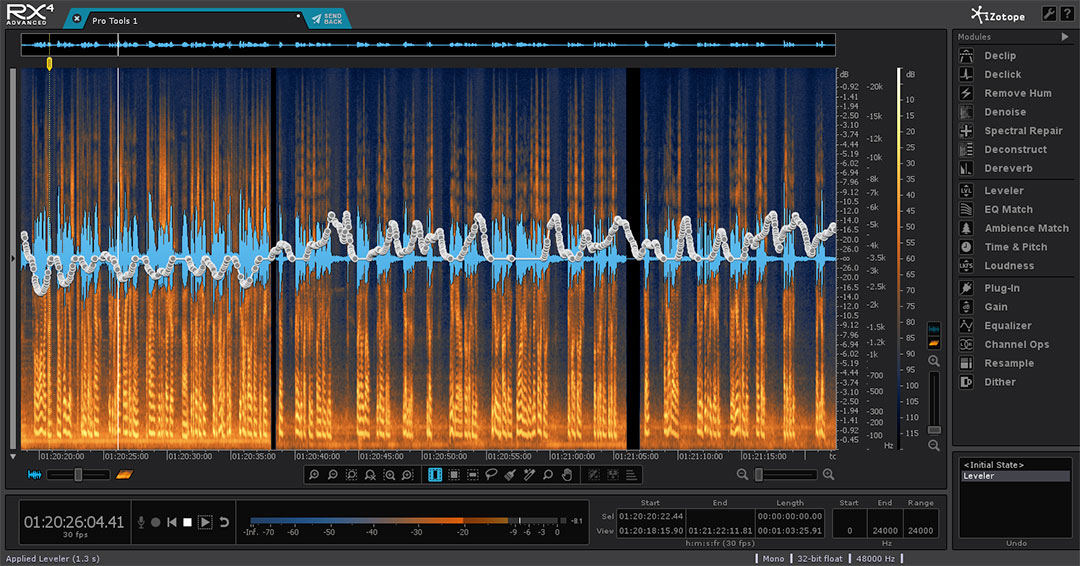 The standard version of RX4 also received a new plug-in called the Dialogue Denoiser which was originally introduced to the Advanced version of RX3 only. This is a great plug-in I use in most of my TV work for just a bit of noise reduction, as it runs real-time with minimal system delay and automatically adjusts to shifting noise floors without needing to learn via a selection. I’m a big fan of real-time noise reduction to speed up my mix and between automating this and Waves’ W43/WNS noise reduction plug-ins, I rarely have to render passes in Audiosuite and break the flow of my edit or mix. Both versions of RX4 also incorporate a ‘clip gain’ workflow very similar to host DAWs. It allows easy gain balancing between breakpoints within a clip, and is rendered on export back to your host.

For RX4 Advanced users, some very attractive tools were introduced in this version. The Leveler uses RMS and peak detection to generate clip gain that smoothes out longer selections of dialogue, and further tweaking for best results specific to the program in front of you is easy. It’s fast and quite workable for smoothing out some of the worst gain structure problems on quick turnaround material, saving quite a bit of time and without any noticeable pumping/compression issues.

Another handy tool helps minimise the time spent searching for matching room tone to connect and cover picture edits when you’re trying to clean up dialogue for film and TV. Advanced now provides a plug-in specifically for this, which seems to be very similar to using the older Denoising plug-in to identify consistent noise in a clip, isolate it and generate a file without the offending dialogue in it. It’s much faster than trying to find gaps in people talking that match the lengths you need.

Lastly, iZotope Ozone has had EQ matching tools for some time, but the process of learning an EQ curve and then applying it to a clip has been simplified in both flavours of RX4. 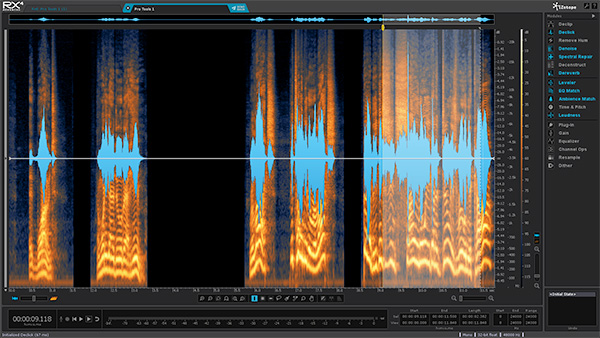 A GAMBLE WORTH TAKING

Overall, I was very cautious about altering my workflow to accommodate to the new RX Connect paradigm, but I’ve been pleasantly surprised and really started to enjoy it within a few hours of work. Being able to select much larger and longer pieces of audio for treatment in the standalone app compared to Audiosuite has sped up my work and the new plug-ins in Advanced are intuitive and produce very useful results, particularly in the world of reality TV where production audio is often lacklustre and turnaround times on audio post are shrinking every project.

Of course, using OS X spaces to flick your screen back and forth between double screens of your host DAW and double screens of RX is quite impressive and leaves your client thinking you clearly know what you’re doing, which is a bonus that can’t be quantified!

Electric Factory is matching the US retail prices in Aussie dollars, making RX4 cheaper in Oz at the moment.

This article was originally printed in Audio Technology Magazine and reproduced here, with kind permission.