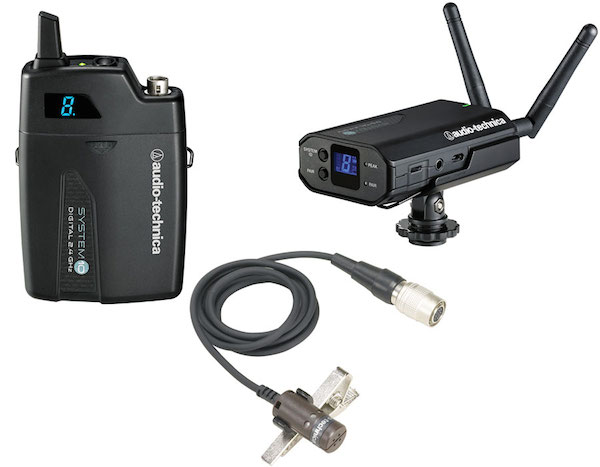 It’s a hot market for hot-shoe mounted microphones and Audio-Technica has miniaturised its System 10 wireless series to fit the mould.

Ah, the DSLR, our least favourite of audio-capable contraption. So good at video, so lousy at audio. Thankfully, there’s loads and loads of audio manufacturers willing to help out. Case in point, Audio-Technica, who’ve released a hot-shoe connecting ENG-style wireless system that won’t break the back. Of course, it’ll fit more sophisticated cameras too, but we all want that nice bokeh for cheap.

Audio-Technica has placed the same 2.4GHz technology as its desktop System 10 receiver into a portable camera-mount body. Notably, the bodypack and handheld transmitters are the same. The system on review comprised a bodypack transmitter, camera-top receiver and lapel microphone.

PUNCHING ABOVE ITS WEIGHT

Lifting the units out of the box, the lightweight transmitter and receiver didn’t quite feel like they’re built for a strenuous lifetime of performing field-recording duties. Nonetheless the plastic construction is neat, compact and ergonomic. The light weight of the receiver actually works in its favour. The last thing you want sitting on top of a heavy DSLR is another heavy chunk of metal — especially if you’re shooting hand-held.

Although light, there is a certain chunkiness to the system. The transmitter is about double the size of the top of the line Shure miniatures. The lapel microphone is likewise large. No amount of sewing it into clothes will disguise this ‘loud and proud’ lapel.

The initial set-up of the mic/receiver was simple. The receiver charged up in a couple of hours via micro-USB cable and the transmitter was ready to go with two new AA batteries (not included). The internal rechargeable battery is a neat touch, but if you’ve forgotten to charge it there’s no recourse to switch to a standard alkaline. Simultaneously powering on both units saw them connect to each other straight away without any help from myself, but there is a Pairing button on the receiver as well.

The System 10 provides a very healthy output level, and there is a level control on the bodypack that can be adjusted with an included mini screwdriver. The sound quality itself is pretty good and held its own up against a pricier counterpart by Shure, albeit with less finesse in the highs. It certainly does the trick for spoken word applications or wherever else you’d use a lapel mic; recording a live speaker or presenter, for example. Recorded voice was reproduced with clarity and a pleasant midrange.

On the odd occasion you’re channeling your inner La Blogotheque and using it on anything other than vocals, a test recording with an acoustic guitar and vocal revealed better-than-expected results. Securing the microphone in a useful spot without some kind of rigging contraption is the hard part.

In operation, the System 10 is very stable. The dual antenna diversity transmission/reception keeps the audio stream clear and uncorrupted on the whole. I didn’t experience any dropouts or loss of connection, even when the receiver was a fair (down the street) distance away from the mic. The receiver features Peak and Pair indicator lights, and there’s an LCD display with readouts of the RF signal level, receiver and transmitter battery level, and System ID. There’s also a 3.5mm Monitor output with level control — very useful when you need to check that the mic is hearing what it’s supposed to.

There are two stages of attenuation available on the receiver (-10dB , -20dB), and a switch for either a balanced or unbalanced (dual mono) output. Unfortunately there is no high-pass filter option and this really limits its outdoor usage possibilities, as the mic is quite prone to wind noise, plosives, and any kind of rumble in general.

At $599, the System 10 is on the cheaper end of the scale for wireless video microphones, but you do get pretty good bang for your buck. If your interest in video recording has grown to where you crave an improvement over your camera’s internal microphone quality, the Audio-Technica System 10 is certainly worth considering.

While there are higher quality options out there, the System 10’s price point and ease of use make it a good choice as a wireless recording option for video, whether it be your first wireless mic product, or as a backup to your current system. 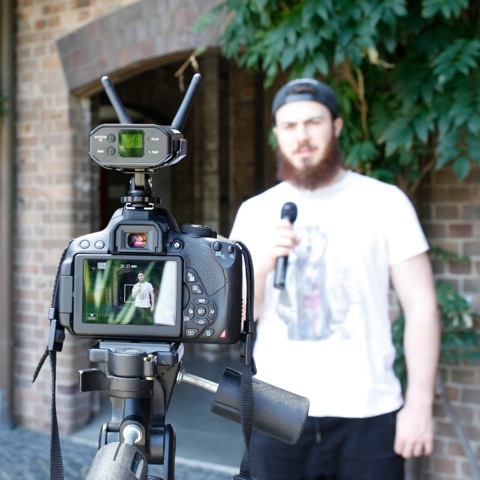